This week I am introducing this new Hermetic Library Newsletter. I also try to talk simply about RSS and ActivityPub since these are related topics, and I also acknowledge there may be a learning curve. But, I think it’s worth the effort to do.

Hope you had a great, happy, fun observed and astronomical Beltane, or whatever and however you celebrate this time of year.

Beltane is often observed May 1st, but astronomical Beltane, ☉ in 15° ♉︎ (Sun at 15° Taurus), occurs circa May 5th, in the Northern Hemisphere; a cross quarter day, mid-point between Spring Equinox and Summer Solstice, sometimes celebrated on a fixed day, from sundown the previous day, or on an astronomical measure. 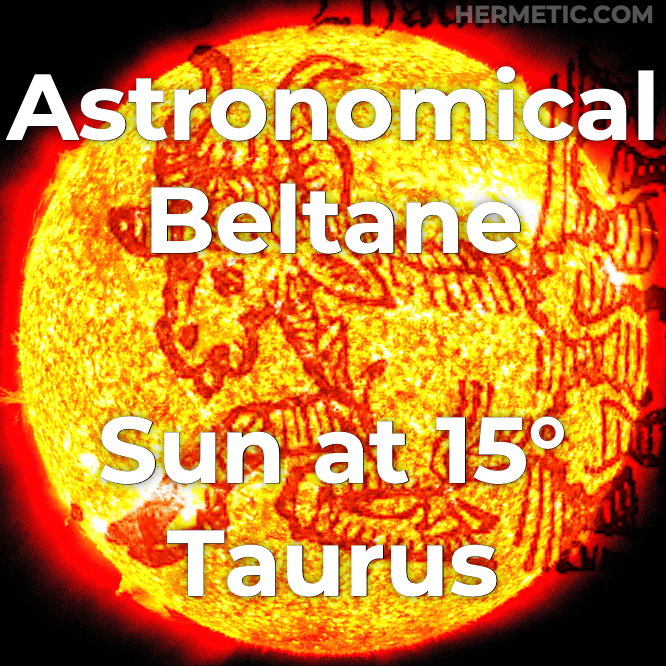 You're soaking in it! This is a free weekly newsletter where I’ll talk about Hermetic Library stuff, for some definition of that which is sometimes overbroad and occasionally silly. But, mostly, this is a way to update people interested in hearing about Hermetic Library stuff that will actually reach them, outside of the nasty shushing algorithms designed to not let that happen.

To all my existing subscribers, and anyone joining in new: Thanks for being here! Thanks for reading this!

If you were subscribed to the previous newsletter, you should be getting this via email. I sent one last note to the old list with a heads up about the new list, so, if that’s you, hopefully you found this safe and proper in your inbox. If not, then something went awry. (If you’re not here, raise your hand!)

I’m not sure what I’m doing (still!), but I’m doing it (again!). I think I’ve got the basics, but I’ll be fiddling with things for a while. There’s things that both this and the previous list can do, but there’s also a bunch of things that are unique and different with this new list. I’ll be exploring those things over time, but some are things I’m already doing now.

This should be very similar to the previous list, except where it isn’t. All in all, I expect that the content will be much as it was. I’ll write about what’s been going on and what to check out in all the places as I’m wont to do.

But, since this is new, if you notice anything odd or awry, let me know!

One of the new things I do want to call your attention to is that is this not just an email newsletter which is also available on the web, like before, but it's also available across the 'verse. If you've got a Mastodon account somewhere, and you're already following the library accounts at Hrmtc I∴O∴ which I introduced last week, because of course you’re following all of them, right?

Then you can do something almost the same and follow this newsletter via Librarian at the new subdomain for lists and things.

One other improvement to note about these accounts is that unlike the big social platforms which only sort-of allow public access from the web, because those other places popup nagging alerts blocking people’s feeds from the web after some point, being essentially only lip service to open access and functioning most like a honeypot to entice people into platform enclosures, these accounts are fully part of the open web, like the whole library site itself has always been.

I’m also no longer tracking open and click rates, so what you do with these newsletters is your private business. It was stressful for me to think about those metrics, and it is frankly invasive of your privacy. I hope that you’ll read and enjoy these, and check out all the things, but the tool I use to make these is no longer adding crufty tracking stuff.

I want to take a moment and give a shoutout to Write.as which is the service I’m using to host this newsletter. It’s managed hosting for their own Open Source WriteFreely application. So, not only is my subscriber list portable, but the platform I’m hosting the newsletter on is also something I can set up and move anywhere. However, I’m using their hosting service because it takes some of the load off my mind, but doing so also helps support further development of the tool.

Well, let’s “eat our own dogfood” and do this new social thing!

I want to also remind you about another important and I think often overlooked or forgotten part of the open web: Really Simple Syndication, or RSS.

If you aren’t familiar with RSS, it’s a way to get updates from things on the web that have sequential updates, like blogs and microblogs and things, and to get their content all together use them in an application (on your desktop, mobile device, in a browser, & soever) called a “reader”. Here’s a recent article for more of a primer: “A guide to using RSS feeds, the files that contain real-time updates from websites.”

An RSS almost always looks like code if you go to it directly (although technically there’s a way that it doesn’t have to that no one sets up!), so you’ll want to use a reader app, and there’s a bazillion of them. Personally, I’ve used a lot of them over time. Currently, I am using the free and open source NetNewsWire, which is Apple only. Here’s a couple that are both web and a app-based to check out: Feedbin and Feedly. Here’s a primer on how to get started with Feedly that may help give even more info on using RSS useful even if you end up with a different reader app: “Getting started with Feedly. Cure information overload in 3 simple steps.”

Basically, this was an awesome sauce on top of the open web, that corporate enclosures like the big social and search platforms don’t want anyone to use, because RSS is a way to escape their controlled silos. RSS kinda got spiked by the big platforms, but really should be something everyone is familiar and using.

With that said, let me say that pretty much everything I do with the library has an RSS feed!

Generally you can just use the URL of something and your reader will discover the location of one or more RSS feeds available for it. For example, there’s the RSS for changes on the Hermetic Library site itself. There’s also ones for the blog, each of the new socials like @librarian, even this list! (Remember, clicking on those directly will end up looking like code, so use copy those links into your reader!)

I’d like to suggest that you consider RSS as a useful tool for you to follow along with your favourite websites, not just the various library things, but across the Internet.

By, the by, in my previous newsletter, when I introduced Hrmtc I∴O∴, I talked about Mastodon as if it were the underlying protocol. I just wanted to say that I was not correct about that. The actual underlying protocol is ActivityPub. Mastodon is the Twitter-like tool that is built on that protocol. The other tools I mentioned (such as Instagram-like PixelFed and Medium-like WriteFreely) are not built on Mastodon, but ActivityPub. I was a bit confused about that, but I think that’s sorted in my mind now; and hopefully yours as well.

I’ll mostly not talk about ActivityPub, but rather just talk about the ‘verse. Because it’s simpler. Also funnier, in a nostalgic for a never-was Firefly that isn’t problematic kinda way.

By the by, this newsletter is being written within the aforementioned WriteFreely! So, that’s where the ability to now follow this list through the ‘verse comes from.

Apparently, I’ve maybe become a convertion zealot? Egad. I’m embarrassed for myself. I’ll go breathe into a paper bag and calm myself down.

I want to acknowledge that may be a learning curve here. Recovering RSS from disuse, and discovering ActivityPub might be unfamiliar and strange, but, like, many things, they can become familiar and normal if you give them a chance.

Also, it may take a little time for everyone’s social circle to include the one or two people that can help everyone else get started, but once that happens, these things should be as normal as anything else that used to be new and confusing, but now seem essential.

I want to thank you for joining me, and hope that you dip your toes in the various ways you can follow along, including the new ones!

I’ve added new merch for May to Patreon and Threadless!

The Patron-exclusive merch is a weird design experiment with the die-cut sticker merch. Check out Swirly-na-gig™️ The Personal, Portable Maypole DIY Edition! 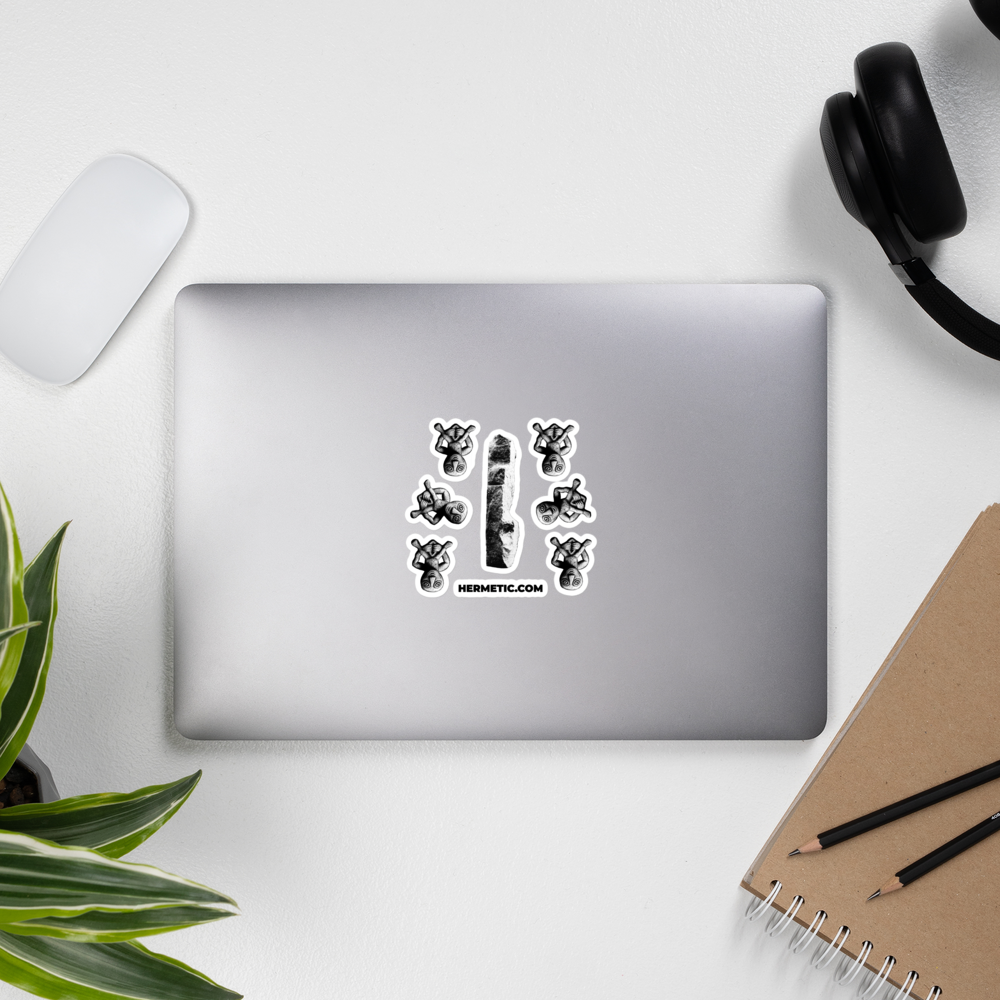 It’s a set of stickers, that you can use any way you want, but also to construct your Swirly-na-gig™️.

Lilith Saintcrow posted over on her Mastodon, “Now I can return to werelion shenanigans.” To which I responded from my Mastodon, “For some reason, I first read that as 'whirly sheelanagigs' …” and it just devolved from there. 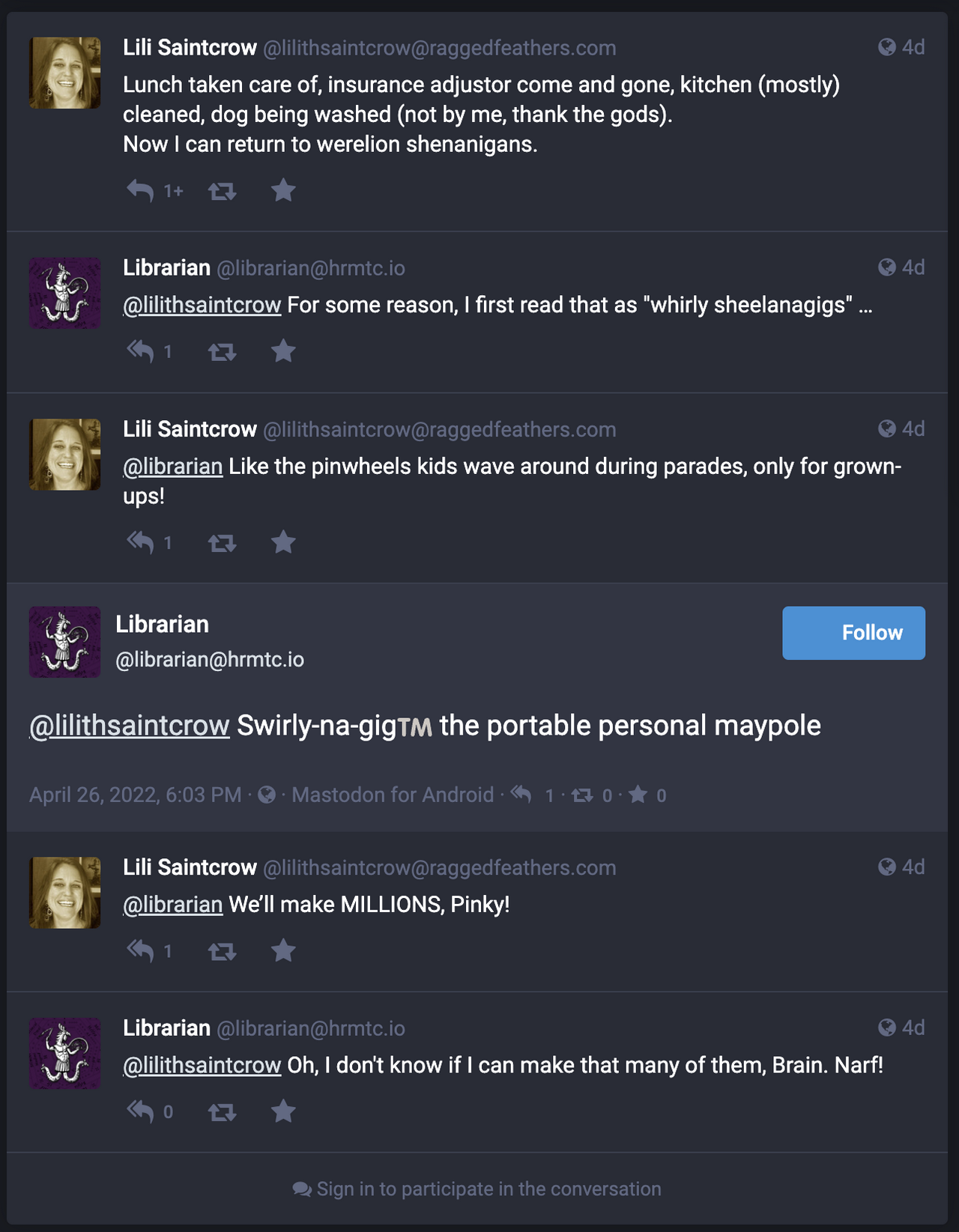 So, I made the thing! 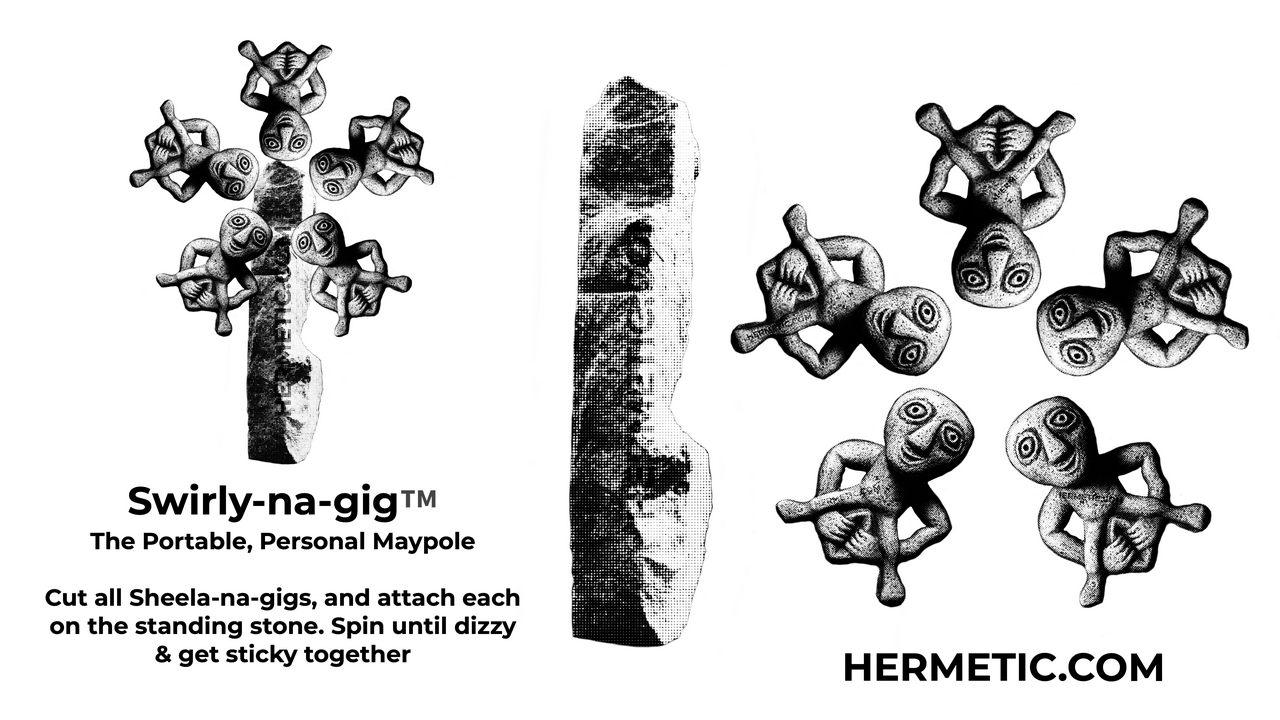 And then I made it into Patron merch! So, you know, become a Patron and get it when you reach the 3-month milestone for it.

Also, I added my UwU / Θώθ meme design to the public merch shop on Threadless on a variety of apparel and accessories! 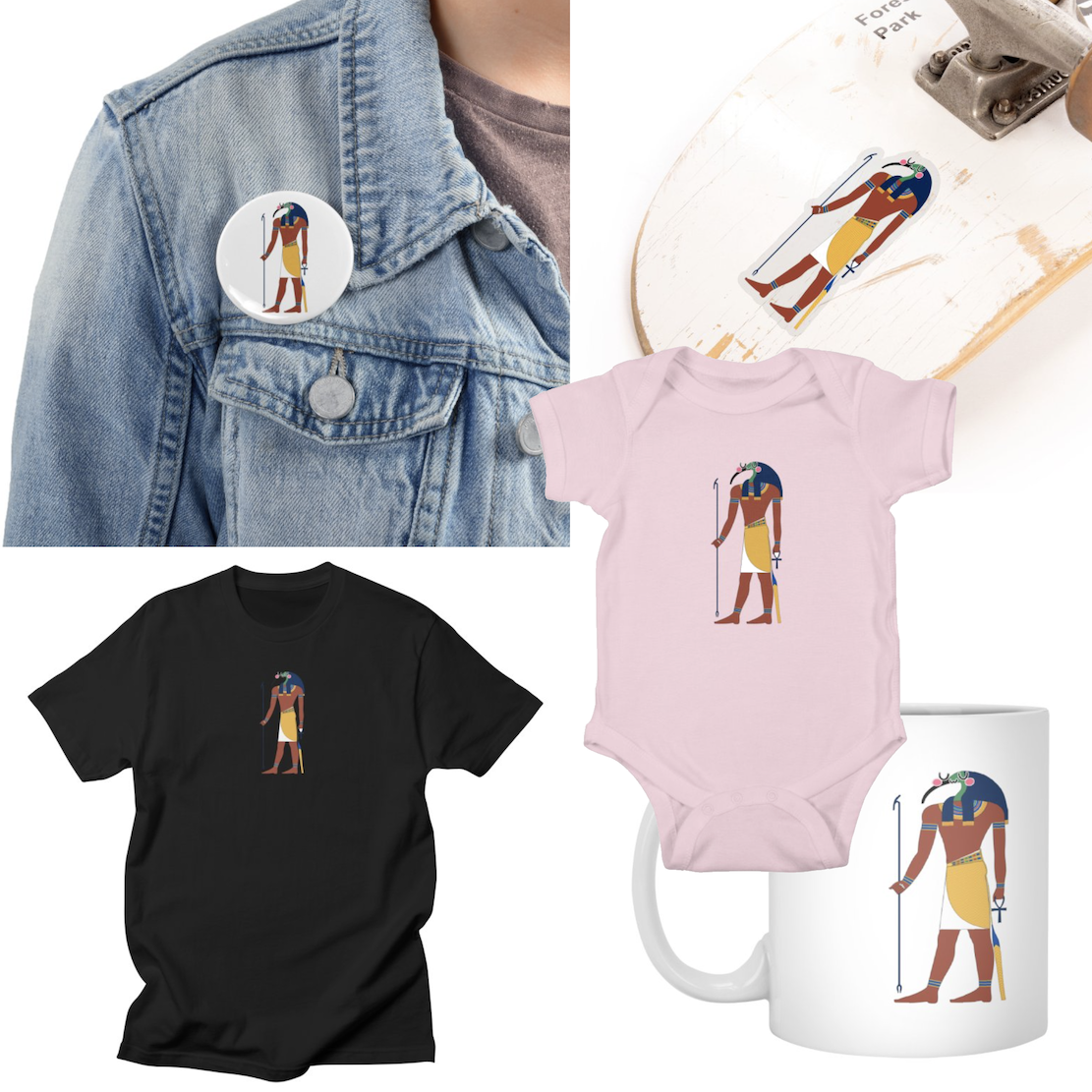 This was originally a Patron exclusive sticker and is based on a quick kitbashed image as a fun meme I created for Twitter, which is, of course, informed by the observation that UwU and the Greek letters for Thoth look strikingly similar, apparently most significantly by Tumblr users Necromanceher and sadoeconomist back in 2017. Originally a Patron exclusive sticker. 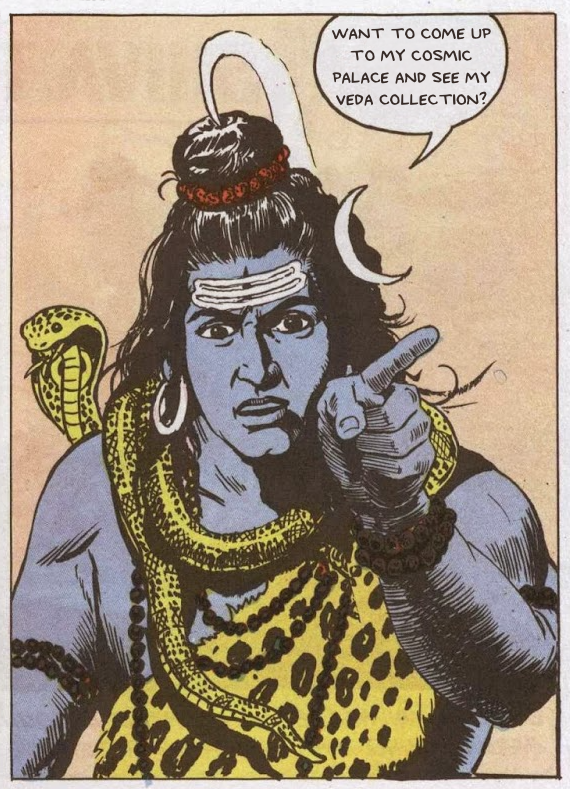 Want to come up to my cosmic palace and see my Veda collection?—Shiva, probably

Here’s upcoming calendar and astronomical events, plus the daily Thelemic Tephilah practice for the coming week, May 6–13.