With the insanity going on on birdsite of late, a lot of people have been newly making their way to the ‘verse, as an alternate lifeboat or just simply moving for real kit and kaboodle, and a lot of those directly on some Mastodon instance. Followers of the main library profile at Hrmtc I∴O∴ has definitely been increasing, all the way to over 175 this morning. Hey, it’s slow, for sure, but it’s something! And, every follower means that the reach of Hermetic Library extends to whatever instance they are on, so potentially tons of other people not following are also seeing things too. I mean, people seeing things I post is a wild improvement over no one seeing anything, right?!

This week’s generative art experiment is text and seal prompts for Ipos in Goetia, and text and image hint for The Universe tarot card as if by Sarah Paxton Ball Dodson. I’ve got a bunch of 4-up grids here linked to the threads on the library’s social if you want to see them all, being individually posted until done. I try out a new rendering engine version that MidJourney is testing. I also go a little meta thinking about what kind of -mancy all this might be. 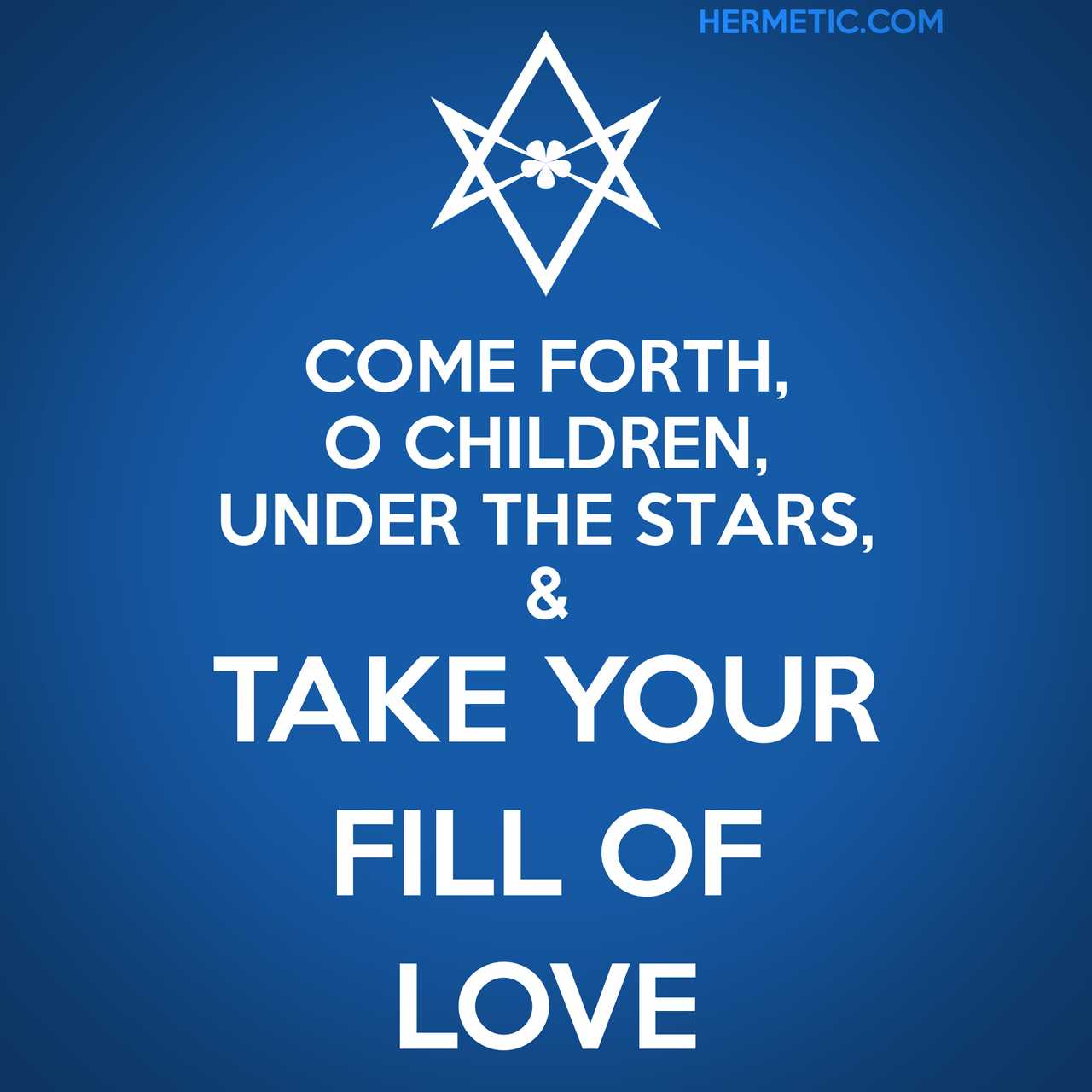 Over on the main library account in the ‘verse, I’ve passed 93 … 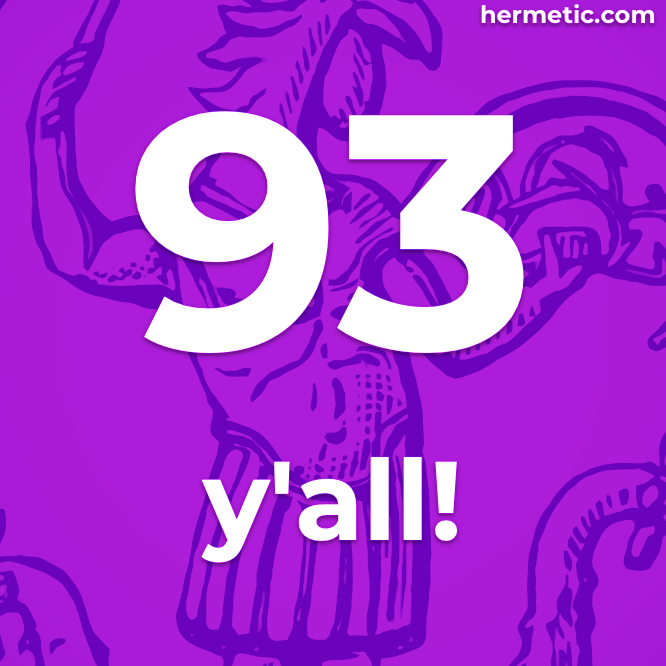 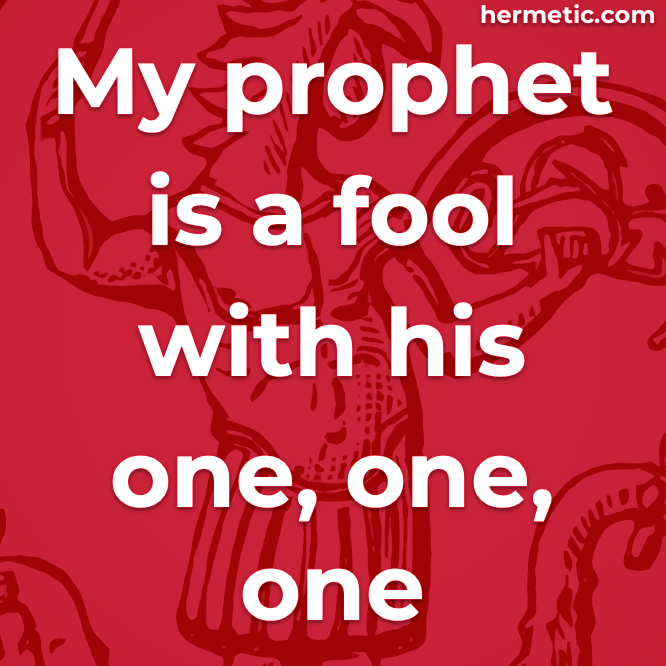 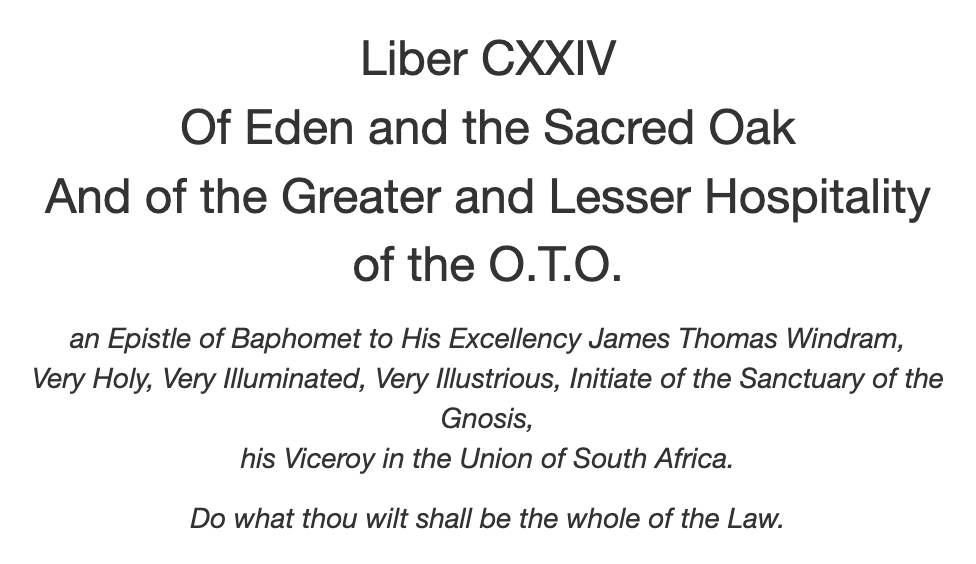 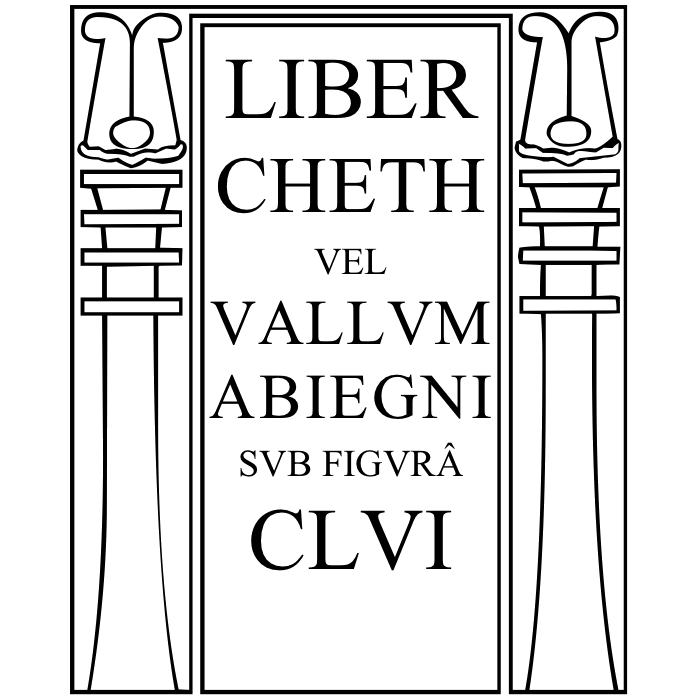 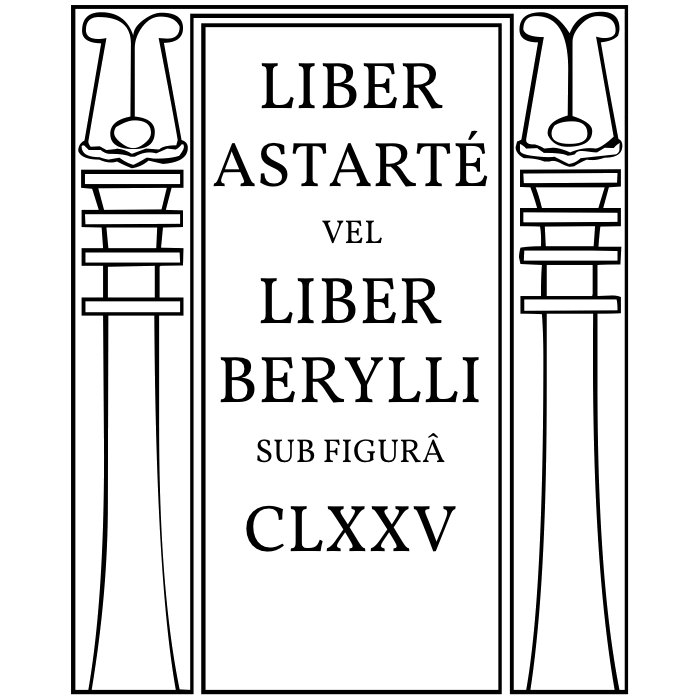 It’s still way slower than growth on any of the other platforms went, but that’s okay. Well, I’ll keep telling myself that’s okay, anyway!

Here’s a shelfie of one bookshelf in the reading room! Recognize anything? Yeah, there’s obscured second rows here and elsewhere, I’m afraid. I have too many?!

Here's a rather old now picture of the Hermetic Library Reading Room with more shelving showing. 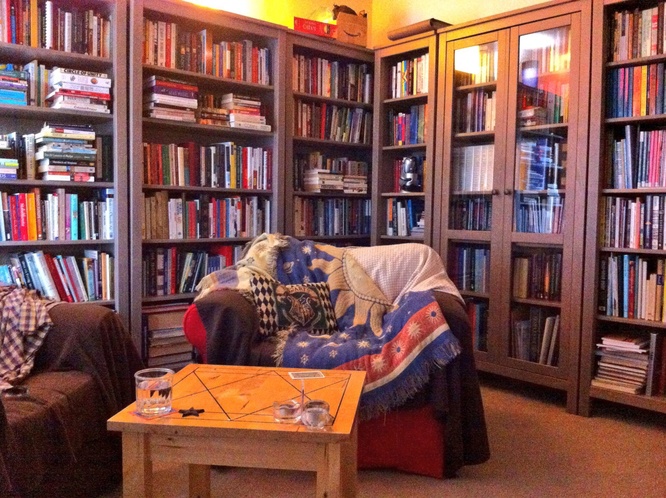 I generated art based on text description and seal image prompts from Goetia this week for Ipos.

(22.) Ipos.—The Twenty-second Spirit is Ipos. He is an Earl, and a Mighty Prince, and eppeareth in the form of an Angel with a Lion’s Head, and a Goose’s Foot, and Hare’s Tail. He knoweth all things Past, Present and to Come. He maketh men witty and bold. He governeth 36 Legions of Spirits. His Seal is this, which thou shalt wear, etc.

Starting the thread on Tuesday, I’m working through the results. Here’s 4up grids of the low resolution versions that I got using a combo of text description and seal image, from which I upscaled images to post. 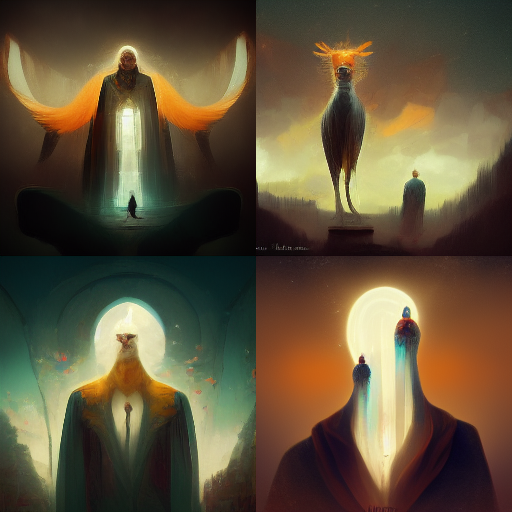 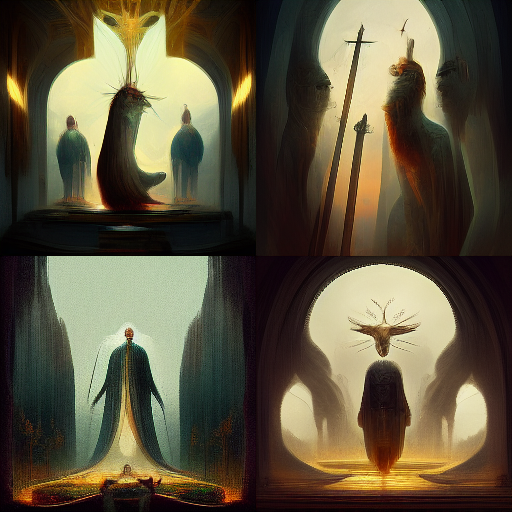 And here a set using only the seal image as a prompt. 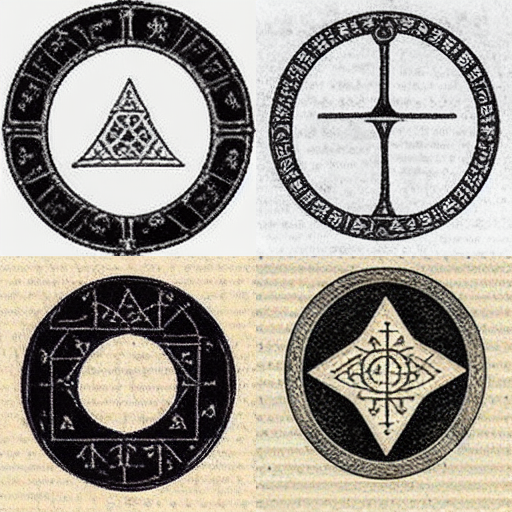 I also found out this week that there's a new MidJourney rendering engine available for testing, so here's a 4up grid where I tried using the exact same Ipos text prompt alone and got very different results! 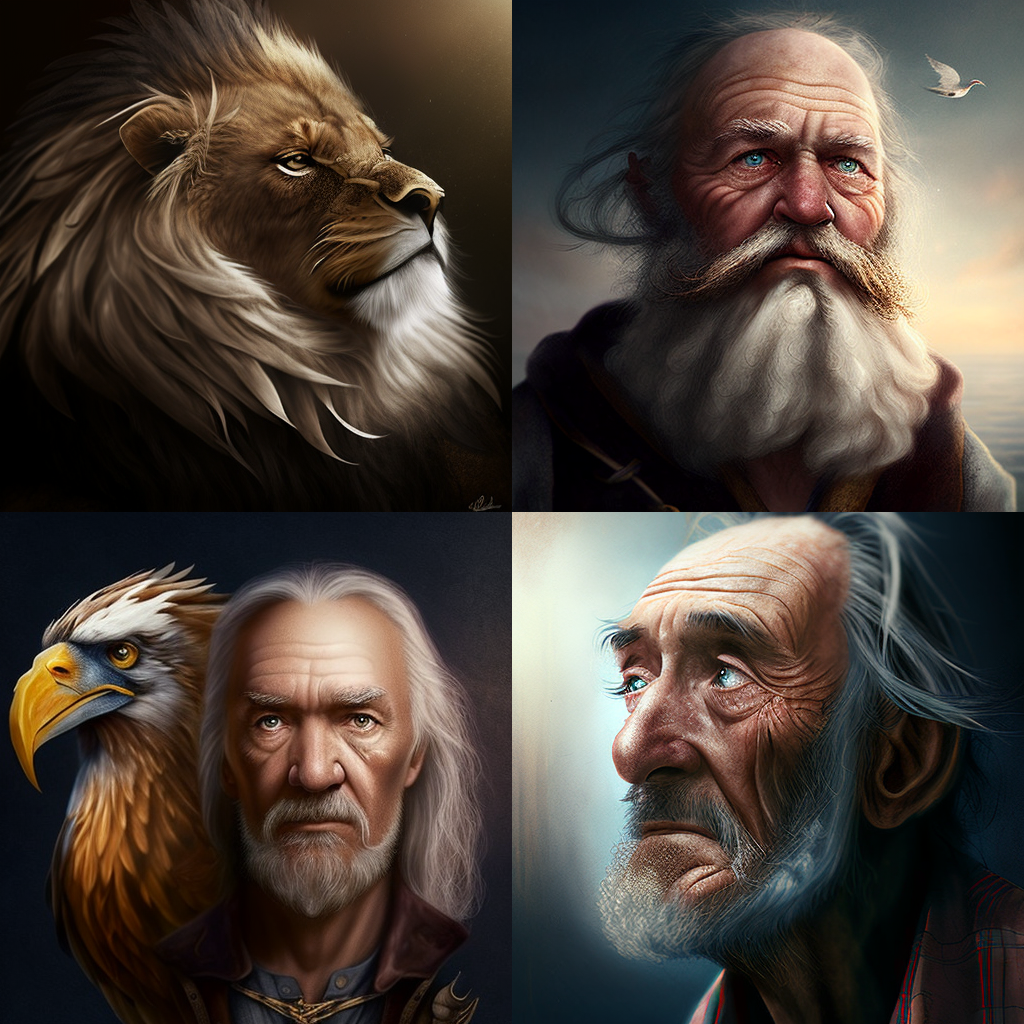 And here’s a grid of results from just the text description using DALL-E. 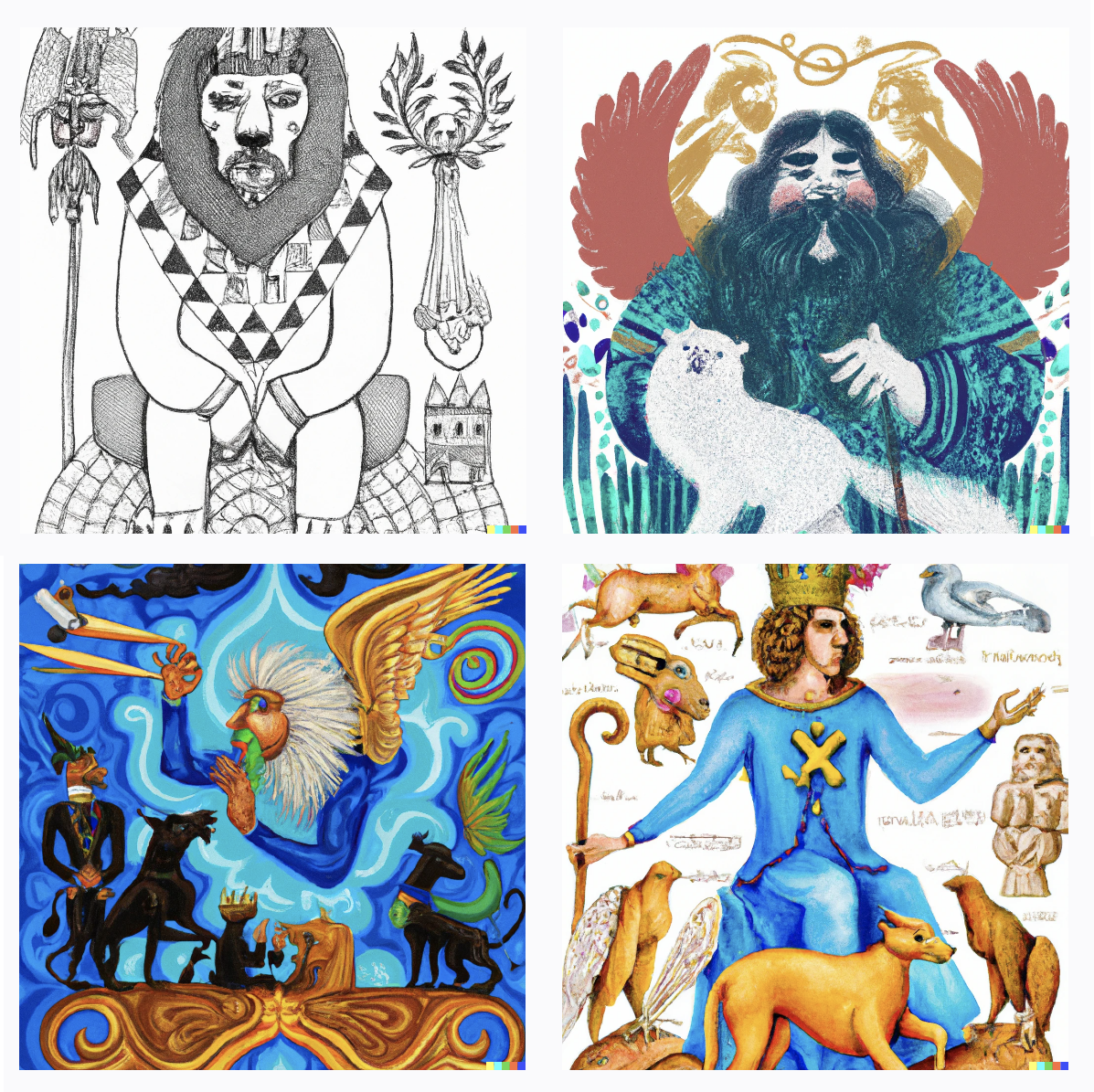 Then, for the Thursday tarot thread, I started posting upscaled results for The Universe card as if by Sarah Paxton Ball Dodson.

Find out more about Sarah Paxton Ball Dodson and for the image prompt I tried using her The Morning Stars. 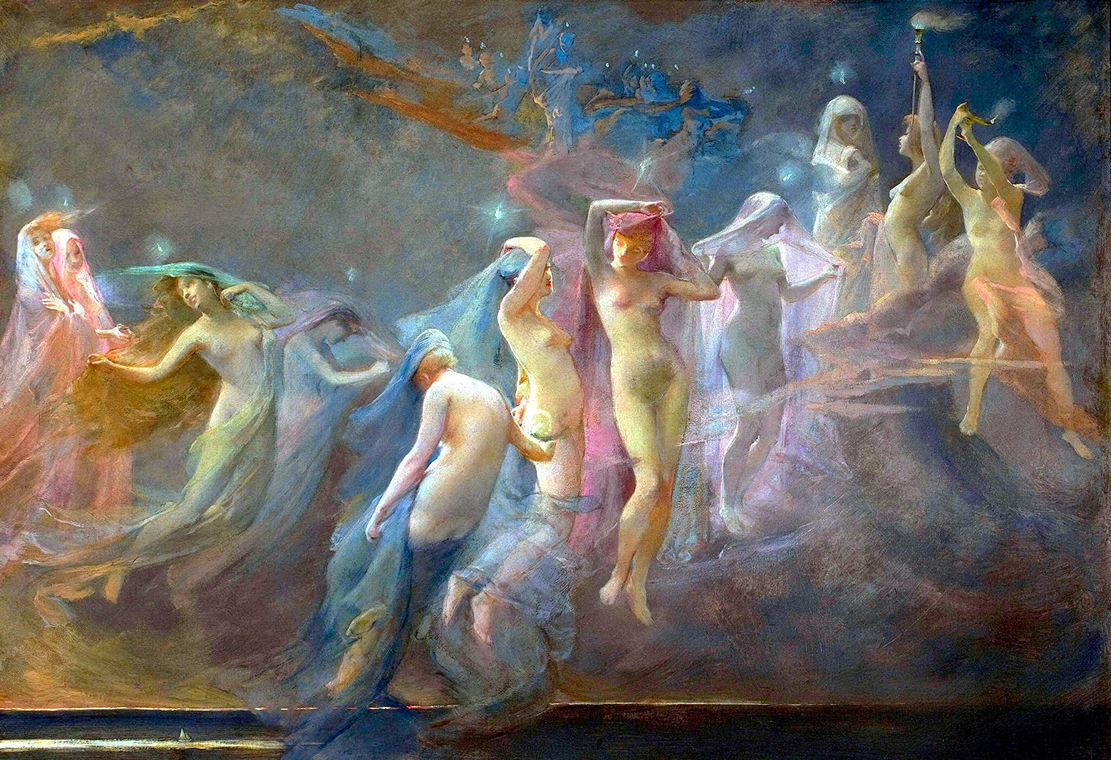 Here’s the grids from MidJourney using a mix of text description with and without the image prompt. 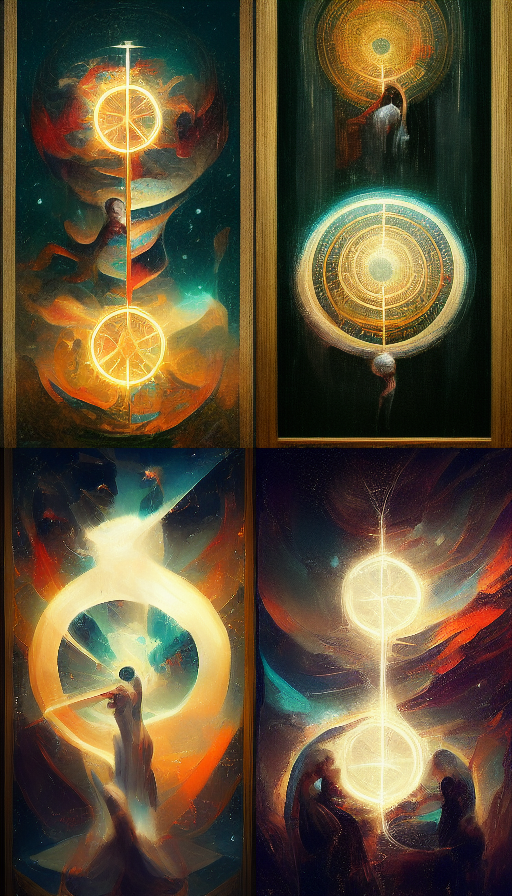 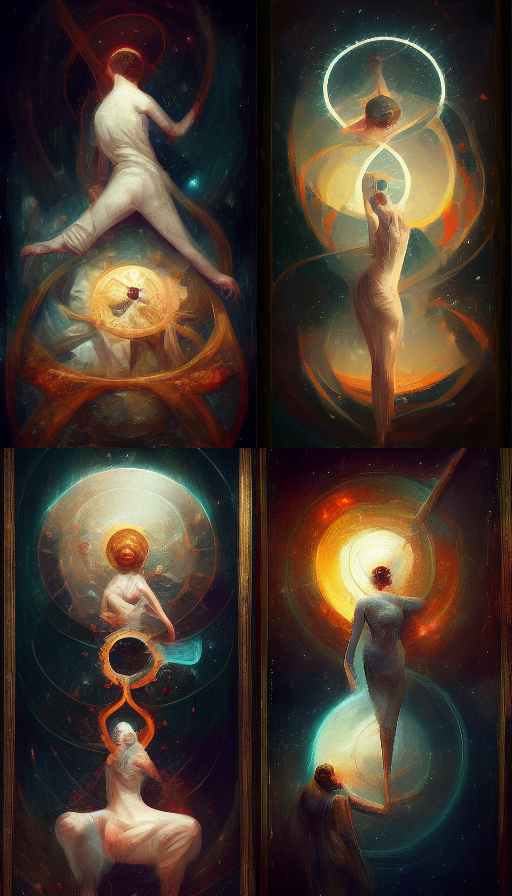 And here’s a 4up grid with results using just the text description with MidJourney’s in-testing new rendering engine. 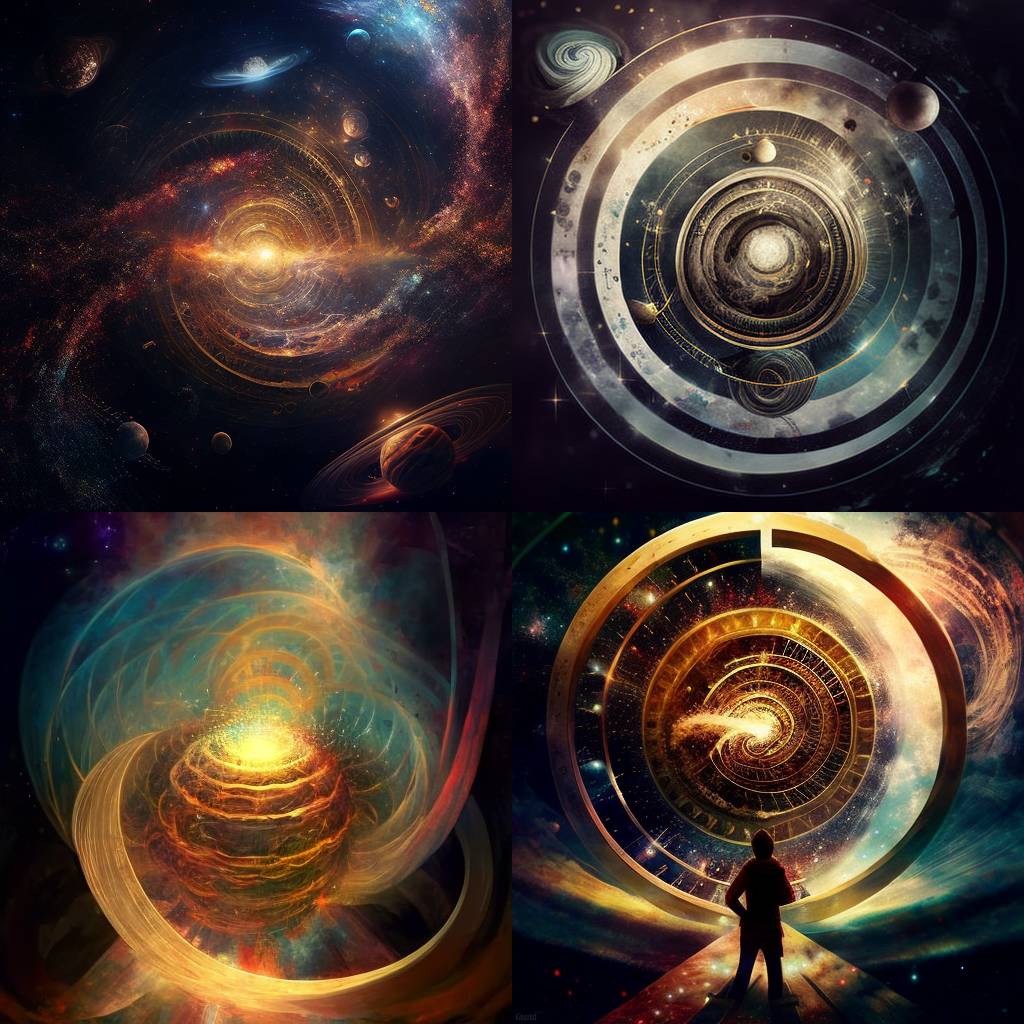 And, a set of results using just the text description with DALL-E. 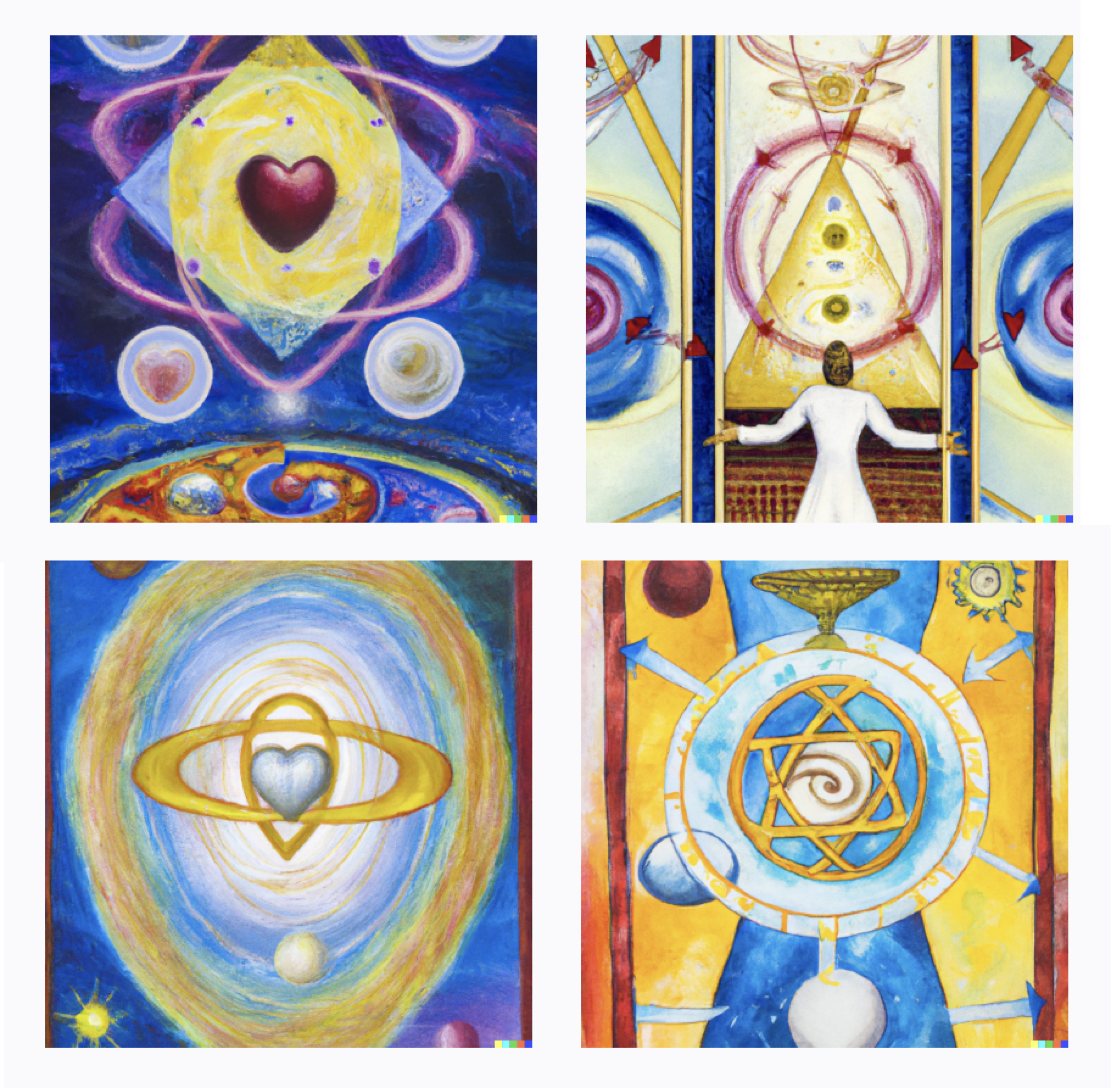 And, with that I’ve created entries in Hermeneuticon for Ipos and The Universe.

My mind keeps wanting to call this project iconomancy, maybe in part because I miss my old Iconomancy tumblog, but that's not right, is it? Kinda like scrying, in a way, this generating images just to see what happens, based on an esoteric query.

What method of divination is this, do you think? 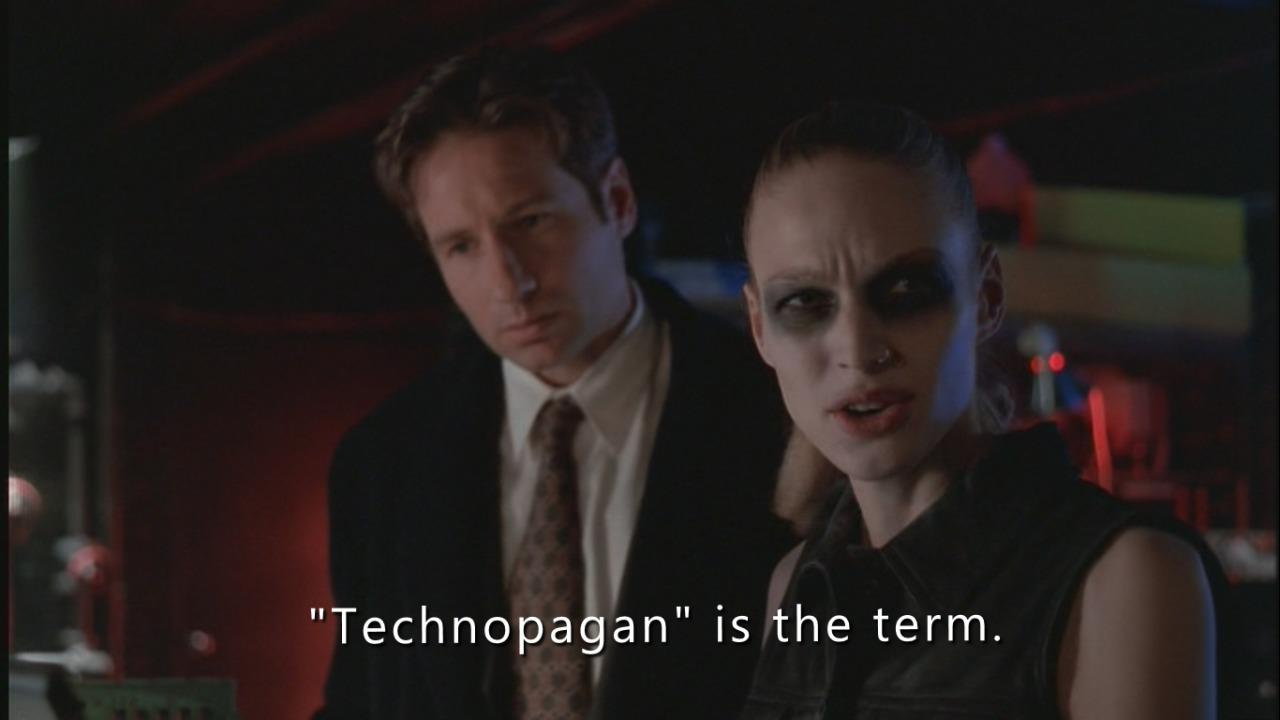 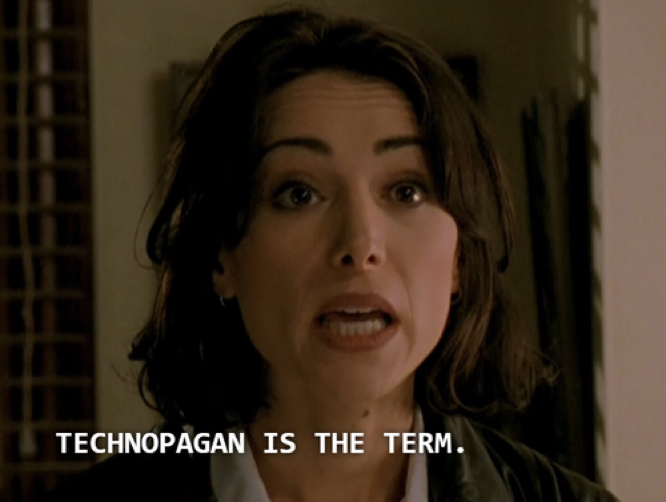 Yes, I hear you. It’s also generally a kind of technomancy. I don't disagree, but I think “technomancy” feels like it is a broader category. But I also think there's a more specific term, or should be, for using image generation tool based on an esoteric query to see what comes up. That's why I keep coming back to iconomancy, except that I usually think of the image coming first there, and then interpreted, instead of generating an image based on an interpretation.

However, the first person that suggests “cybermancy” gets unsubscribed from this newsletter. j/k (or am I?). But, I've got a Blockbuster card around here somewhere for you. Rent The Lawnmower Man. I have less of an allergy to “techno-” than I do “cyber-”, apparently.

And therein I make myself think of it as a kind techno version of automatic drawing. I don't think there's a generally accepted 'mancy' for automatic drawing, at least not one that comes to mind. There's Surrealist “automatism” … and out pops technoautoiconomancy or something. Blarg. If that's it, no, nope, back to technomancy! 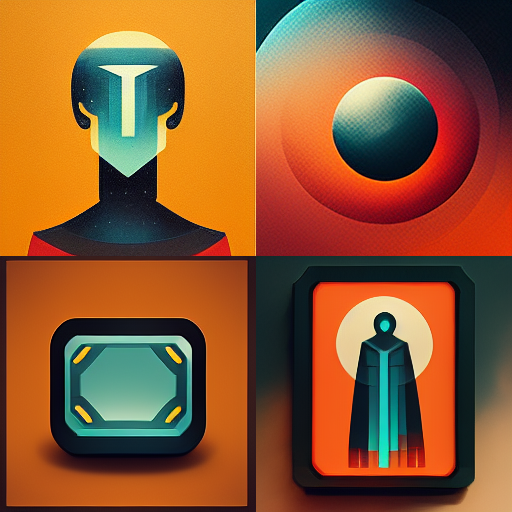 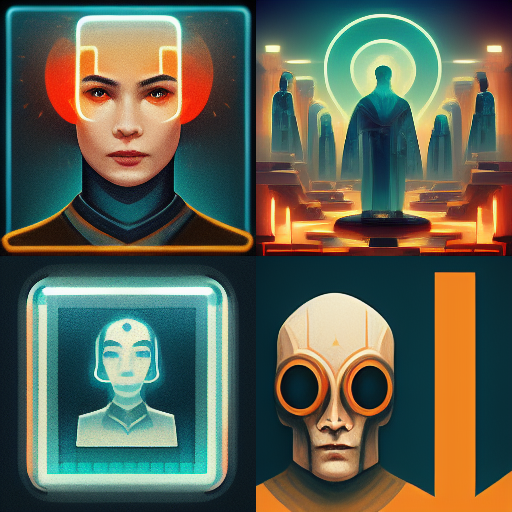 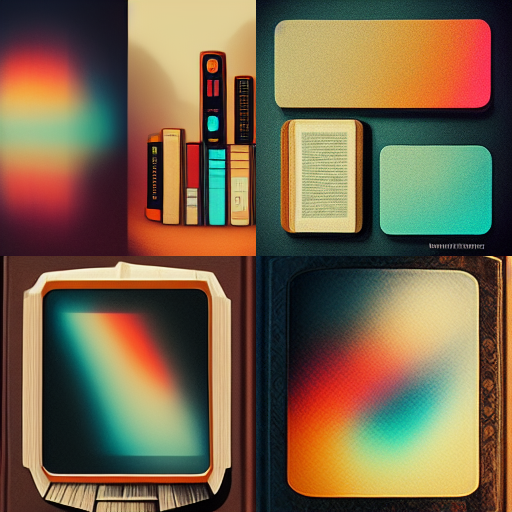 I also put this to MidJourney’s new rendering engine a couple ways. 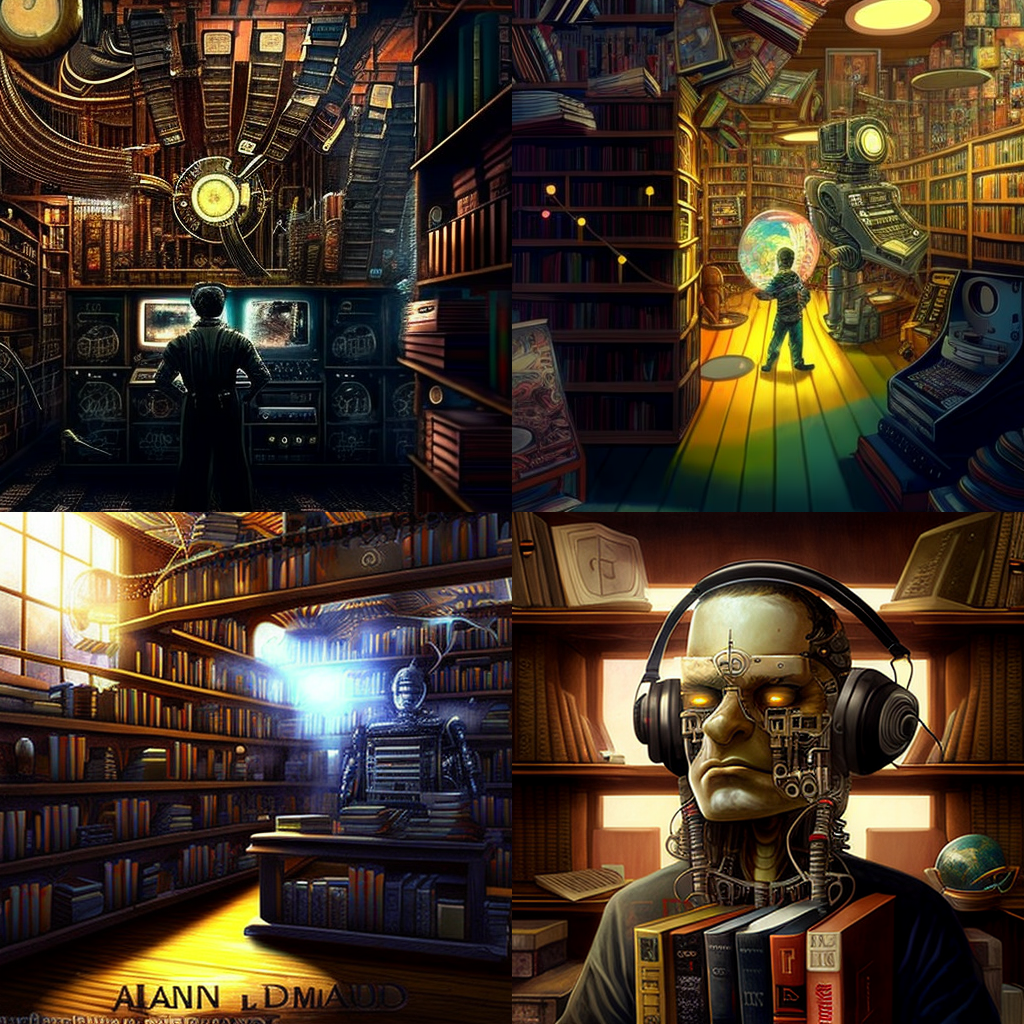 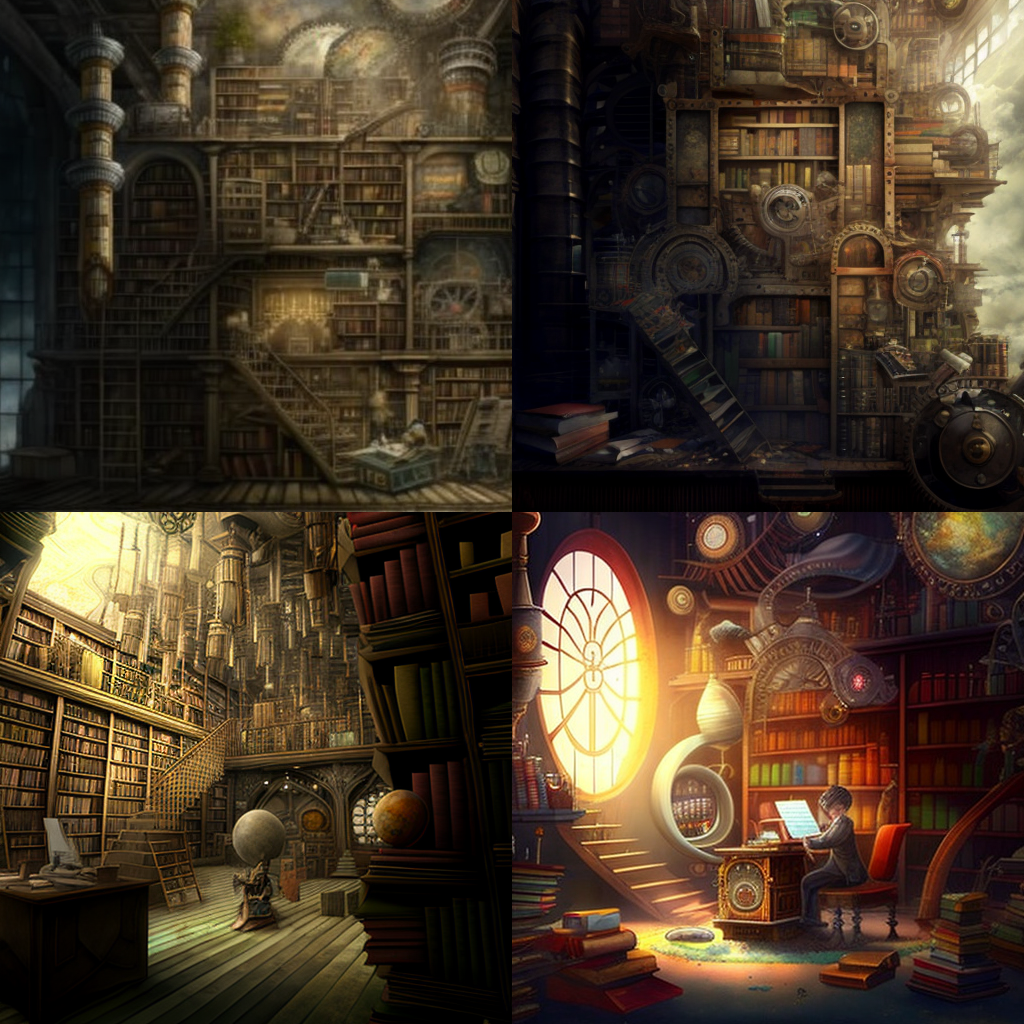 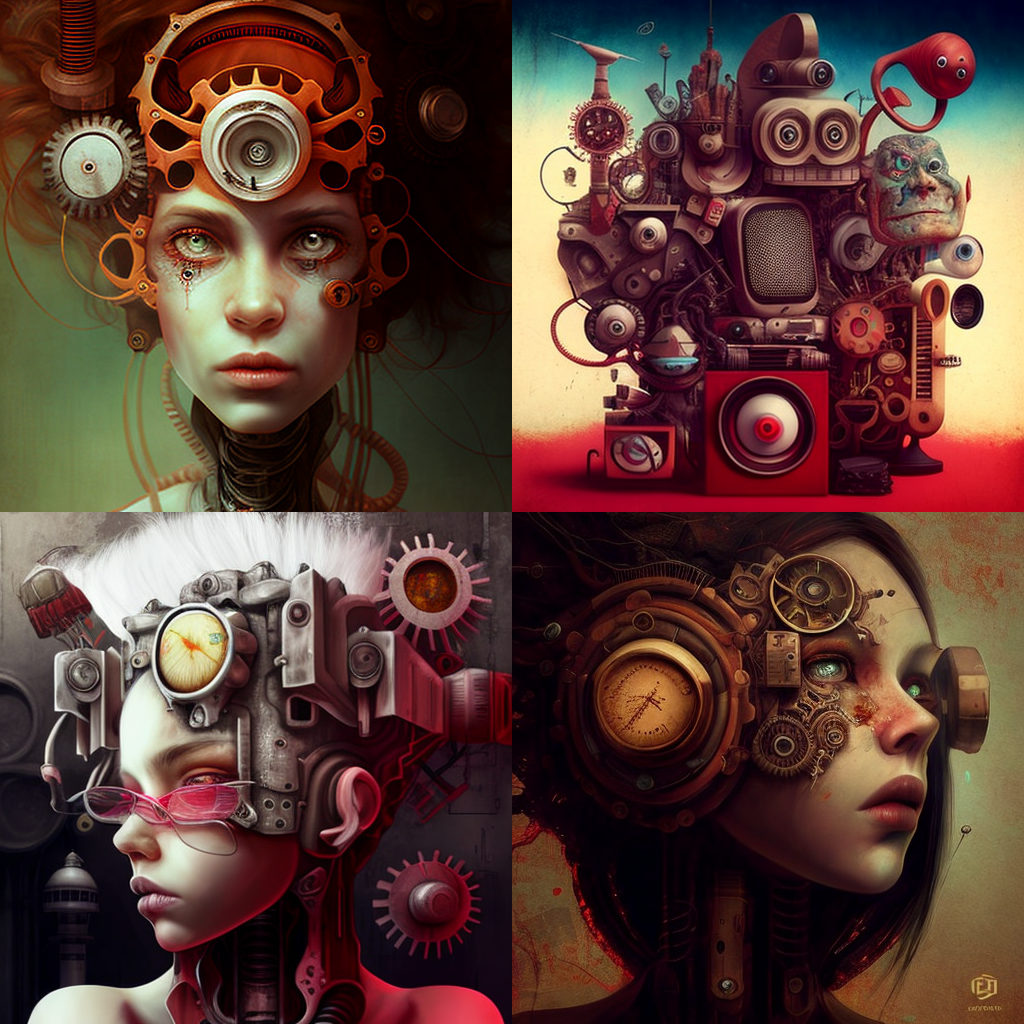 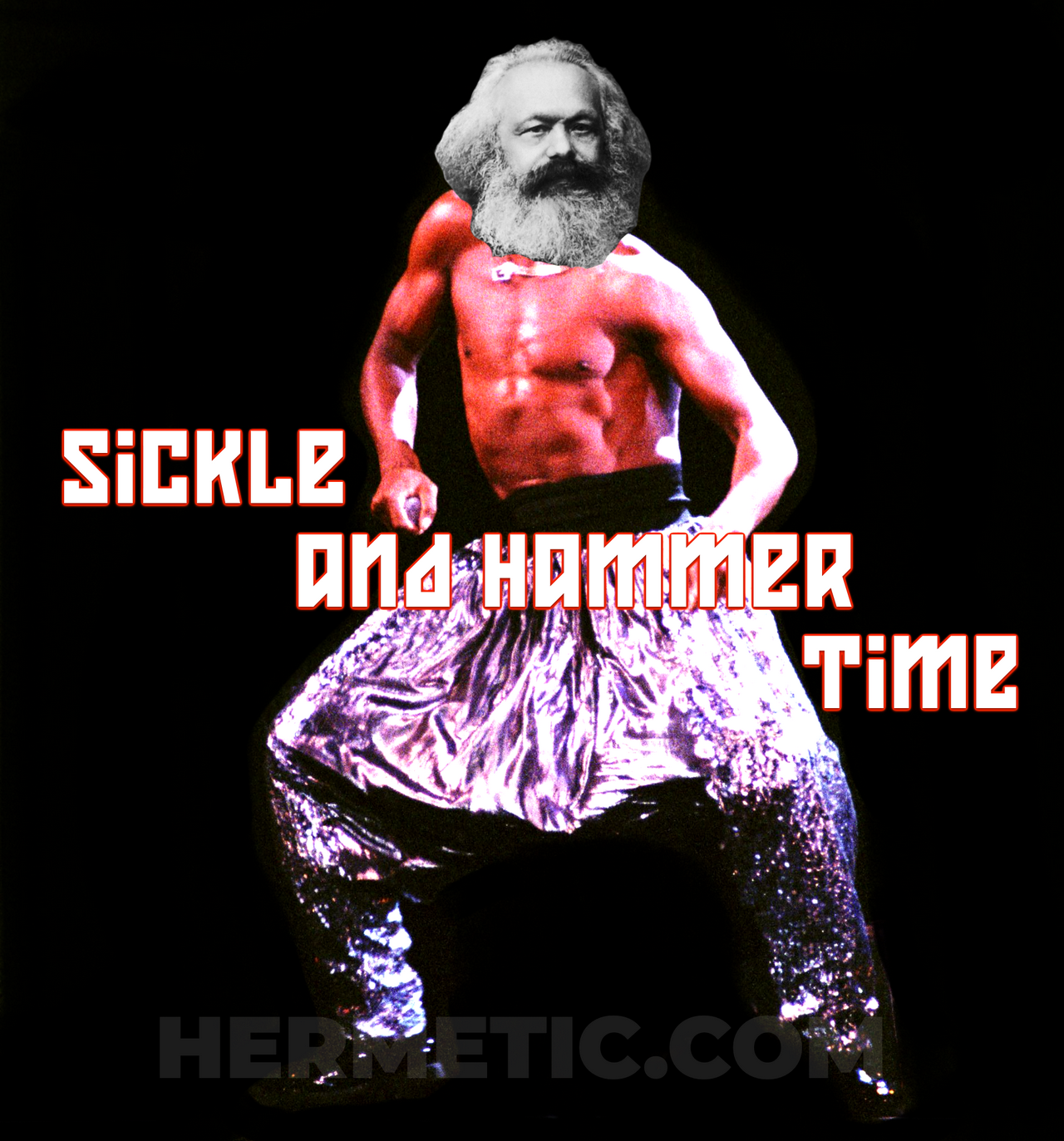