This week I don’t have a lot to say so somehow I manage to talk a lot about that!

Also there’s AI generative art for the week using MidJourney for the prompts “The Hierophant tarot card by Remedios Varo” and the description of Valefor from Goetia. 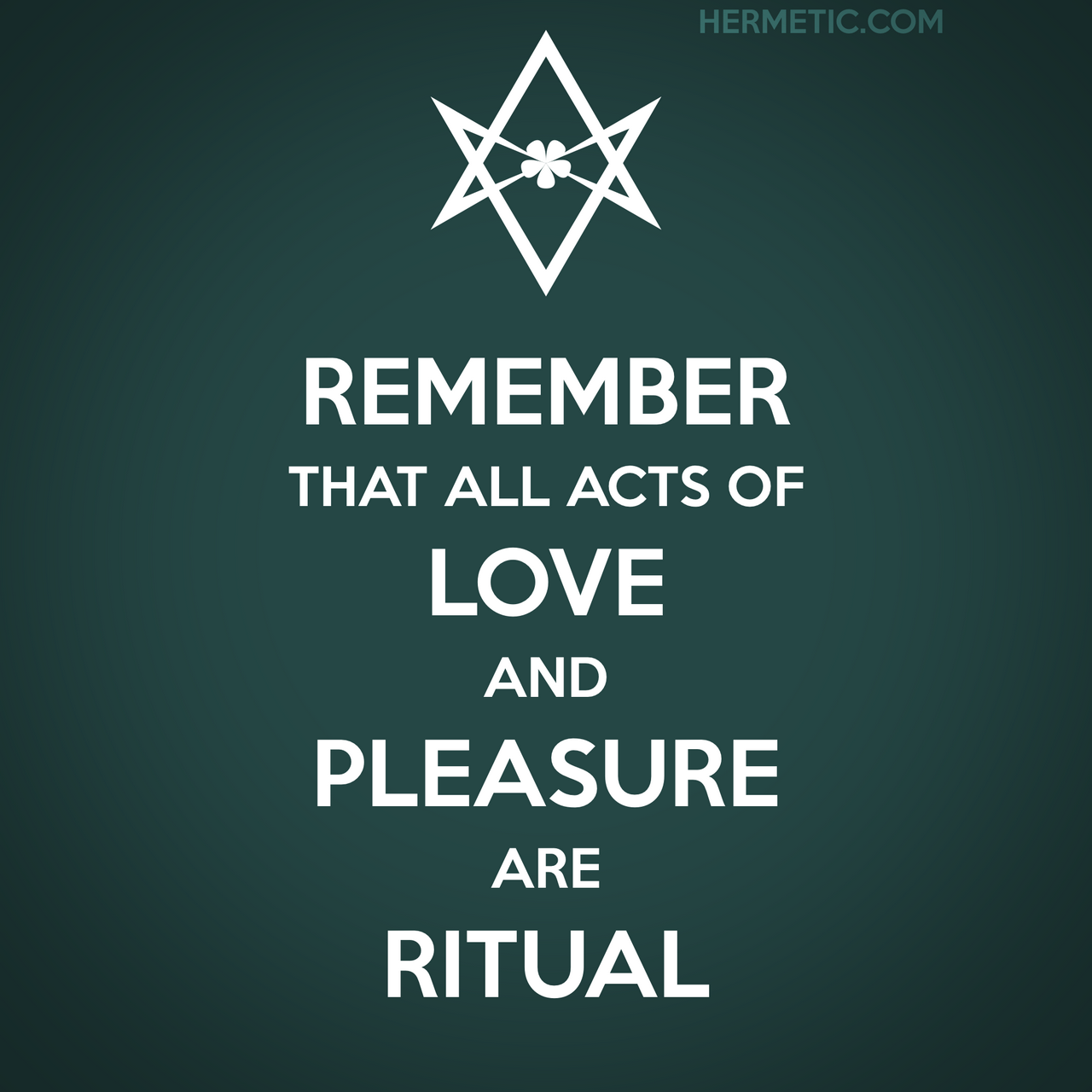 “Remember that all acts of love and pleasure are rituals, must be rituals.”—The Law of Liberty 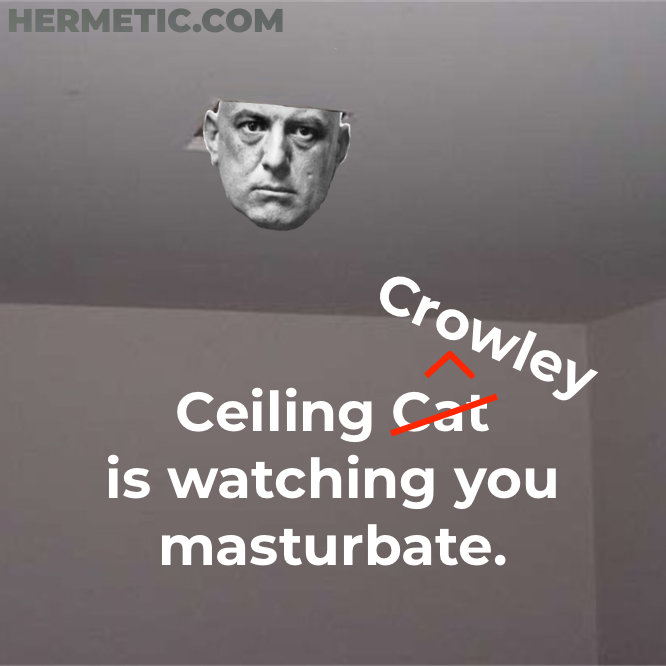 I’m not sure what to say this week

I don’t really have anything burning to talk about. Also, it’s really hot here.

Now that I’ve got the Zine blog and list up and running, even if there’s been no action there yet, I feel a bit like anything I might write, as I’ve been doing, here might be better over there. One of the things I was going to do with the things I’d been writing for the list was to include them in an issue of the Zine, if there wasn’t other submissions, so it’s basically that still, but skipping the step of including it on the list. (You may recall that I also recorded a few of the things I wrote and have them in general rotation over at TALK RADIO @ HRMTC.)

If I did that, then this list would be mostly news specifically about site updates and news and, you know, me rambling on about things like this, right here. What do you think about that? This list was always mostly supposed to be a way for people to get news and updates about the site that they’re not ever seeing when I posted to big social media. So, this became a kind of better version of what I was doing on social media. But, the freedom and obligation of having all the extra space to write beckons, does it not?

There’s been 77 of these things so far. Eleven of them have been using the newest list tool. Let me know what you think about the list, about the new list, and what you’ve most liked, or, I mean, yeah, okay, disliked.

Either way, this year there’s been some big changes and new things around the way I’ve been doing social media, this list, and more. Come join me! If you’re in the ‘verse already, give me a remote follow and if not yet, why not get started now?

Also, it’s a starkly quiet week for events on the Hermetic Library Calendar! If you know of any important historical or recurring dates that should be listed, let me know. And, of course, I’m still hoping for people to start using the new upcoming event list.

Since I appear now to be filling up space by listing all of the things, I would be remiss if I failed to also encourage you to participate in the new Zine. You know you’ve got something! Send it. You can be funny or serious. It can be written or visual. Just about anything. Have you created a sigil lately? Made a pithy observation in your journal? Noticed a quote that struck you from something you’ve been reading?

Actually, since I mentioned quotes, I might as well also say that I’ve always been open to people getting in touch with book reviews and quotes like what I post to the blog from what I’ve read, or from T Polyphilus’ reviews, and so on. Keep in mind that reviews need not be long; take many examples of short reviews by T Polyphilus and those in Bkwyrm’s Occult Book Reviews as an opportunity to hearten yourself that even a sentence or two can be enough too, sometimes.

As to quotes, the one thing that I do require is that the quotes I post are actually sourced. Too many people quote things and attribute them without any check on where and if the quote actually exists. So, I’m at pains to always provide a link or citation of some kind to find the sources of what I post, whether that’s at the library per se or a link elsewhere. Other than that, I, myself, am open to quotes from all kinds of material, as I’m sure you can tell. More properly, what I post are actually from highlights in the things I read, and my strategy for highlighting isn’t only marking things with which I agree or that support my existing opinions; but, rather, I highlight things for a variety of reasons, essentially boiling down to whether I could have some kind of conversation about the highlight, as if I were still reading for study group, or something. Anyhow, to be sure, and part of the point is that, what I highlight is filtered through my own lens, but through a broad lens that is open to considering contradictory and even, on occasion, troubling ideas for at least a moment or two. I recall I’ve talked about this stance before on the list, and in the introduction to the Esoteric Disorientation Manual, so I won’t belabor the point.

Suffice to say, I recall posting an Aleister Crowley quote and being accused, by a very long time and upper degree of OTO, of valorizing Crowley, which blew my mind that someone would think that was what I was doing. Hey, I’ve also had lots of people respond to quotes I’ve posted as if I said them, even though they’re clearly quotes, and try to argue them with me, personally. I suppose, to a certain point of view, that’s sufficient proof that I pick up on important highlights in my reading!

To bring this full circle from having nothing to say, through saying a bunch, and back to having nothing to say again, I’ll stop rambling now … but, again, in conclusion, consider ways you can participate and follow along and, even, if I may be so bold, support the work I’m doing, that you aren’t yet doing!

This week I experimented with generating images using the description of Valefor from Goetia.

(6.) Valefor.—The Sixth Spirit is Valefor. He is a mighty Duke, and appeareth in the shape of a Lion with an Ass’s Head, bellowing. He is a good Familiar, but tempteth them he is a familiar of to steal. He governeth 10 Legions of Spirits. His Seal is this, which is to be worn, whether thou wilt have him for a Familiar, or not. 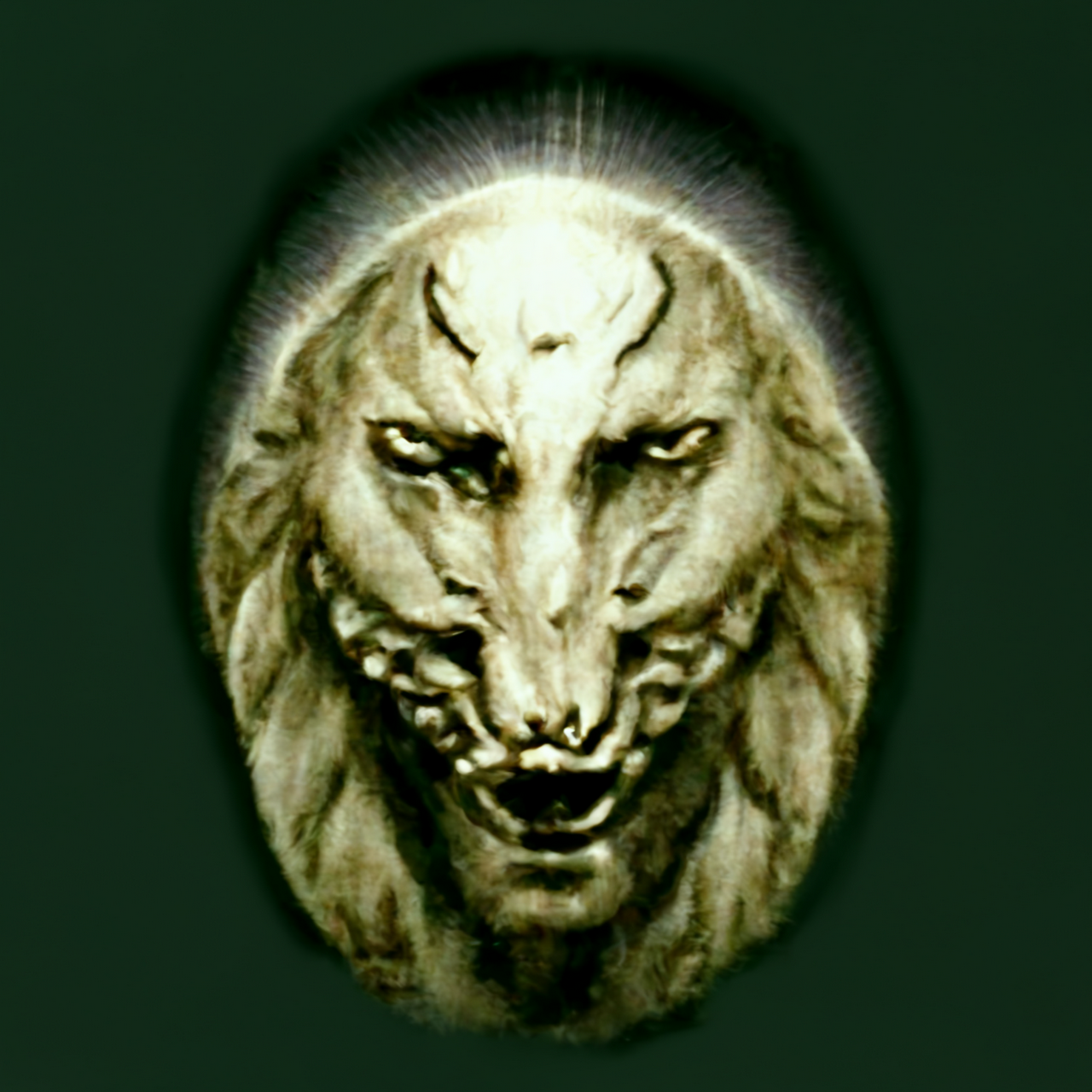 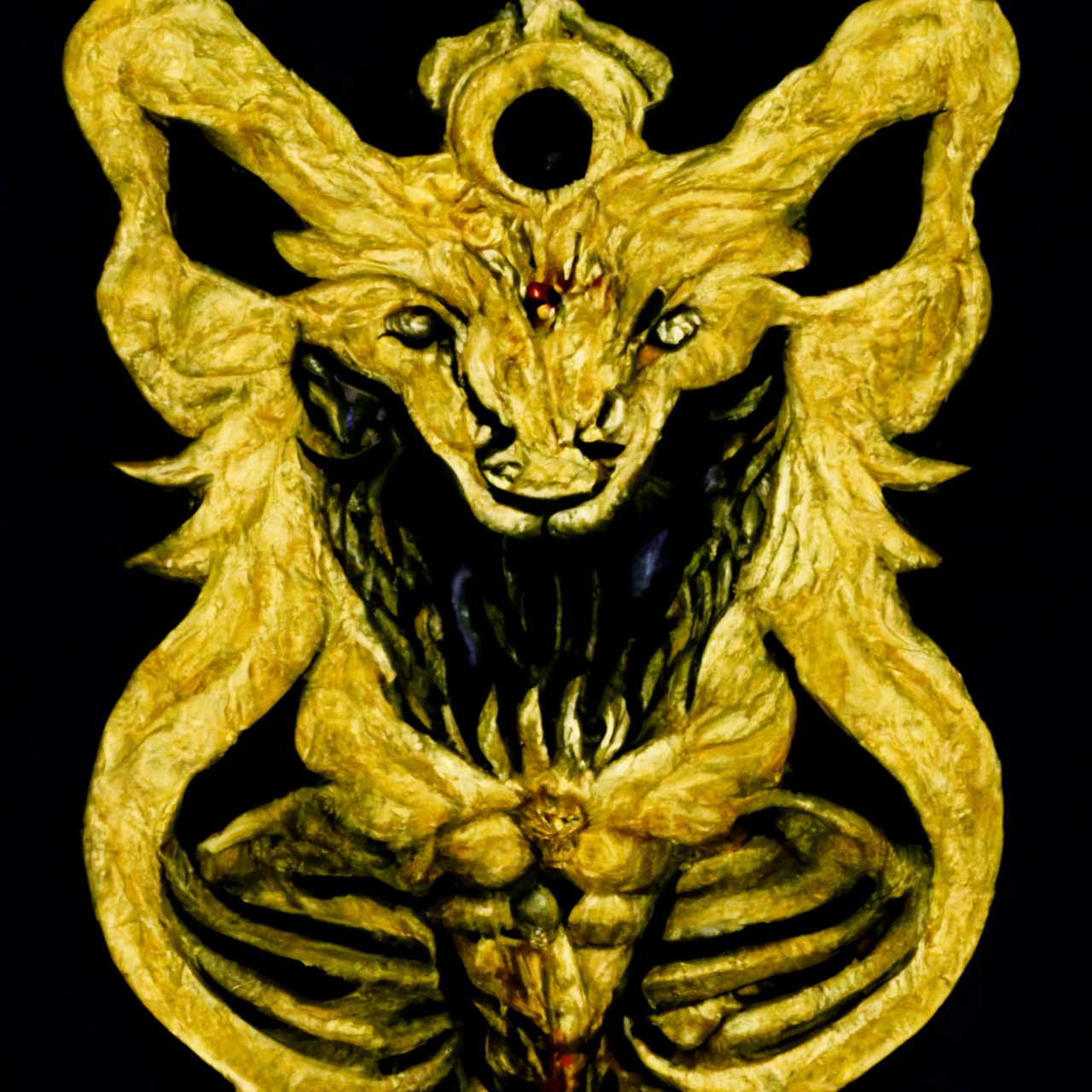 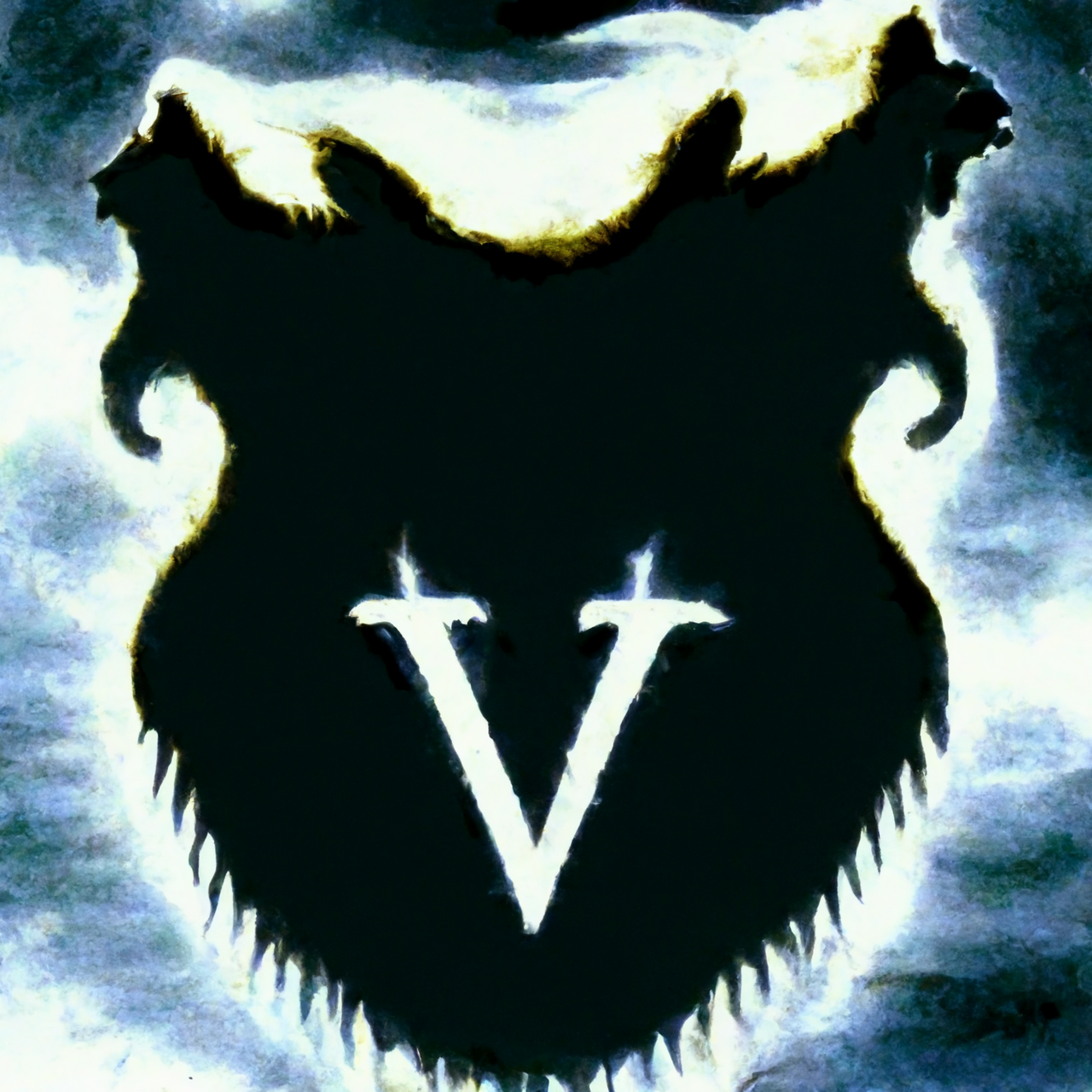 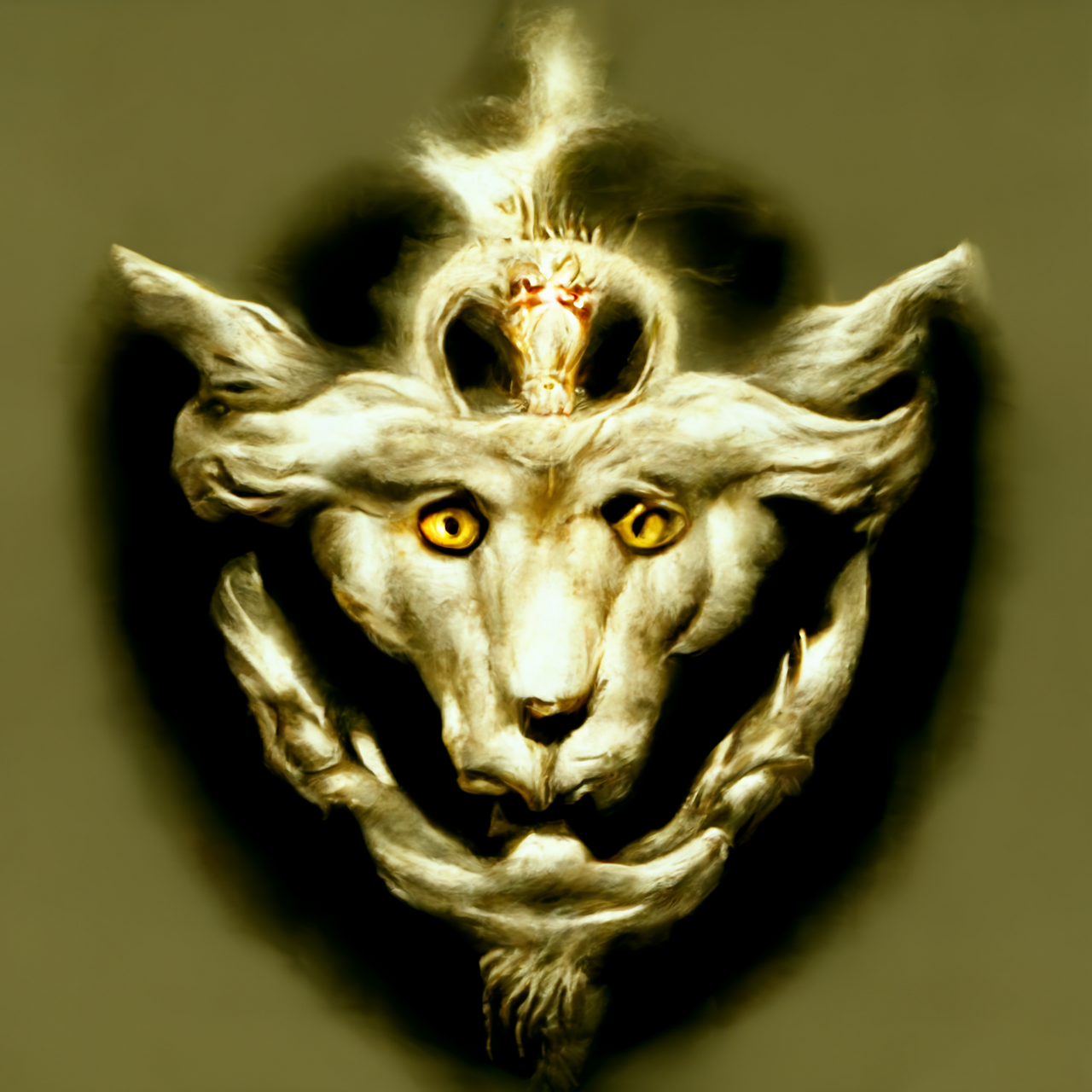 And, I asked for “The Hierophant tarot card by Remedios Varo”. 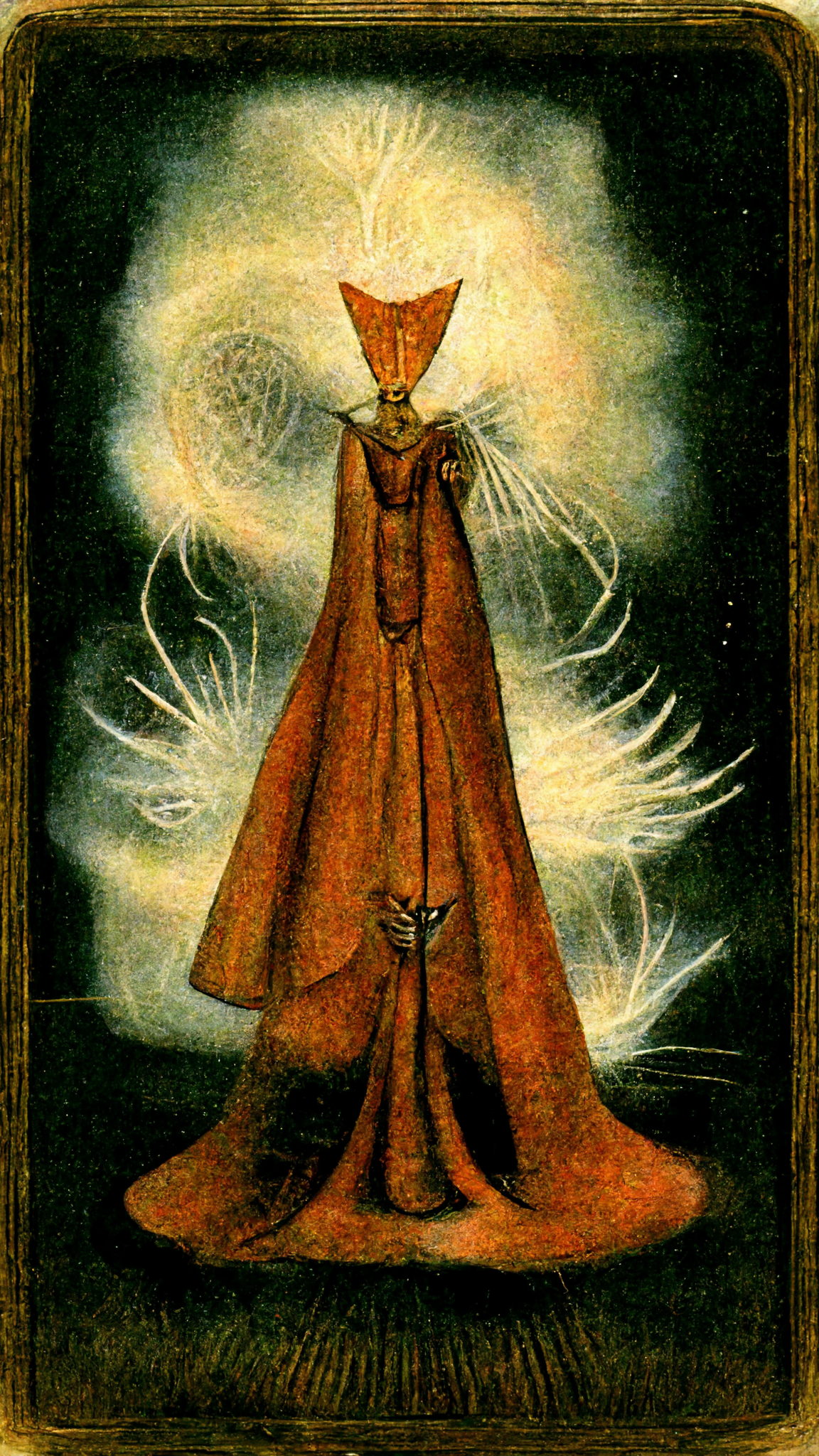 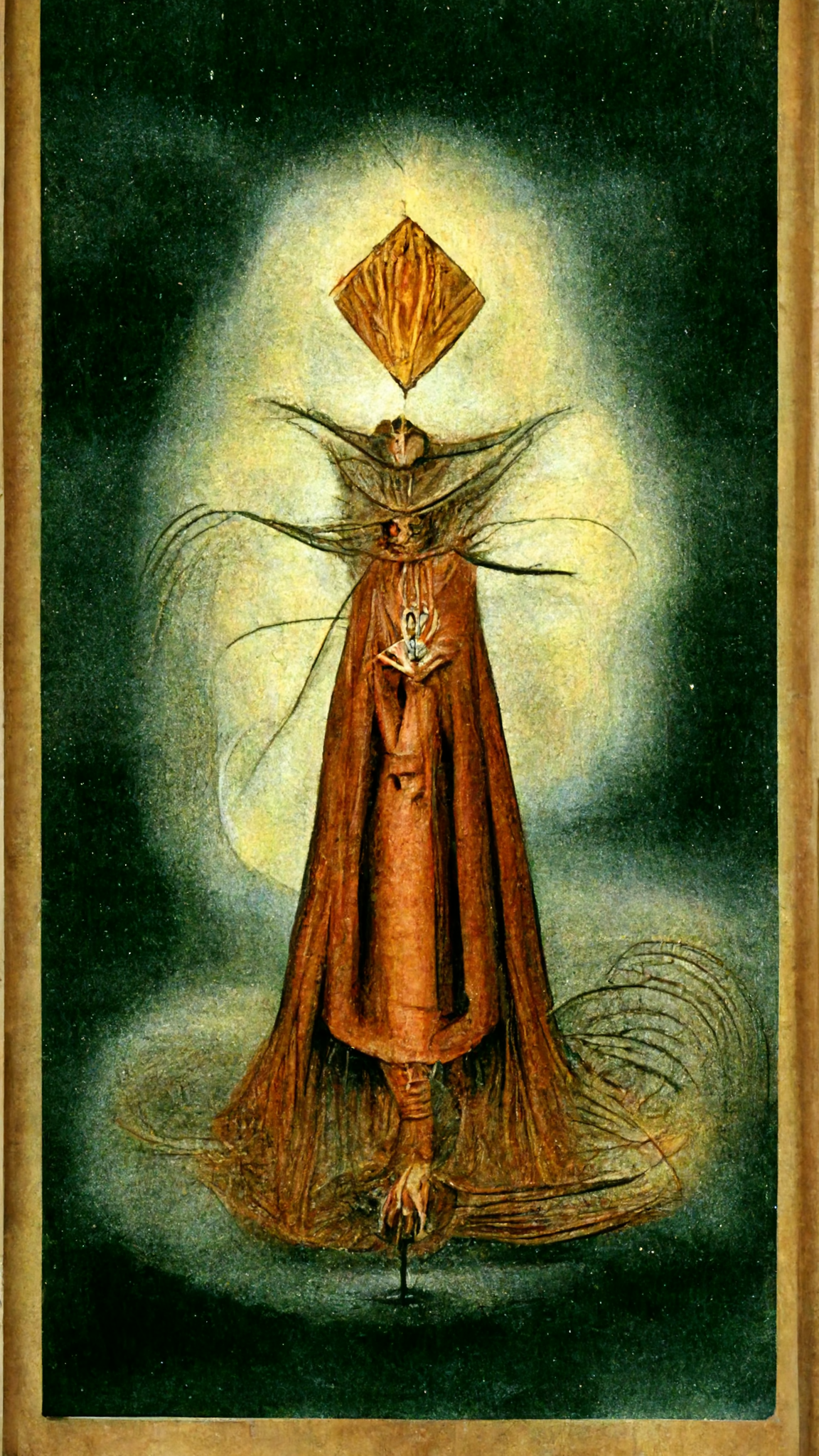 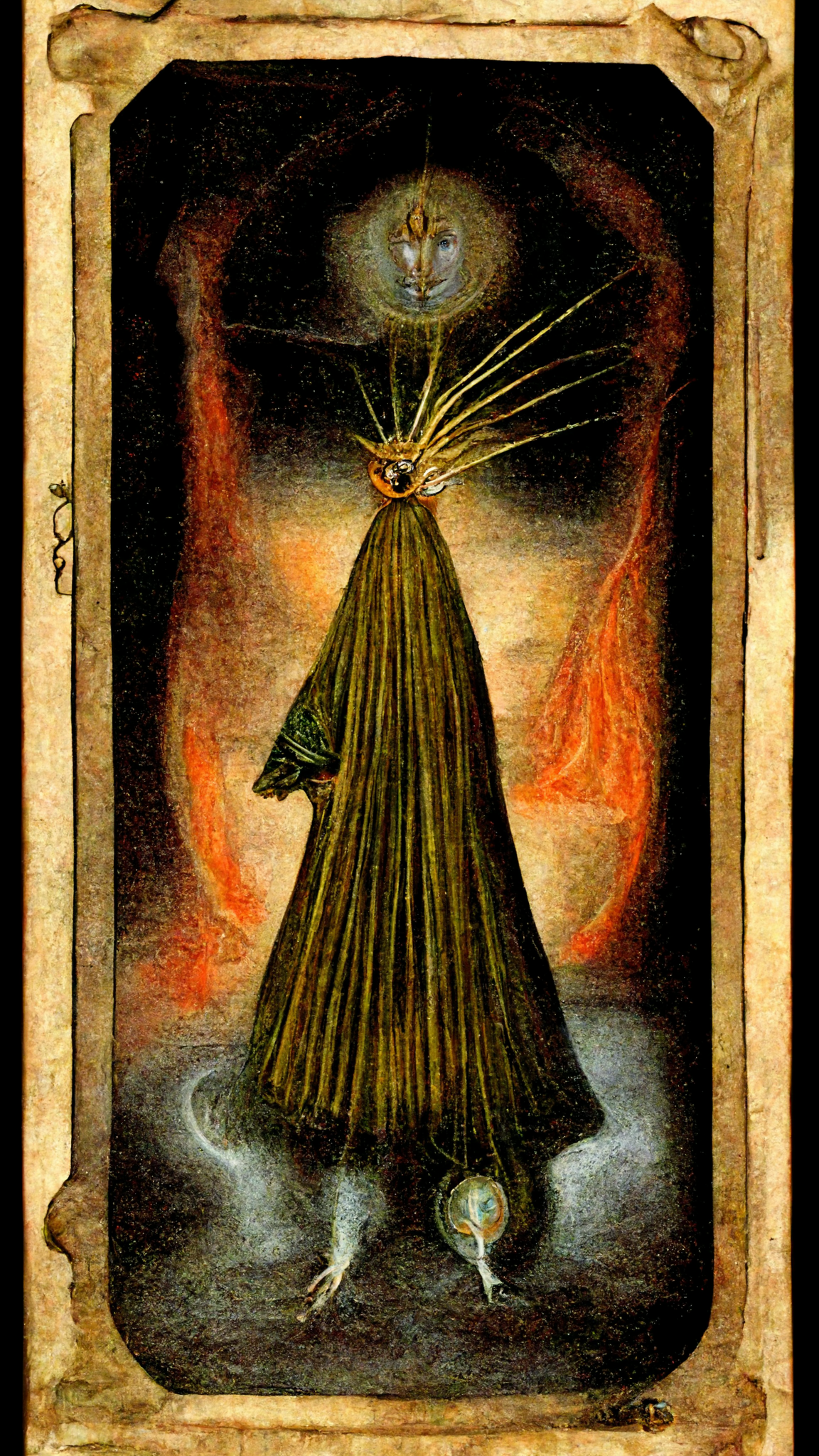 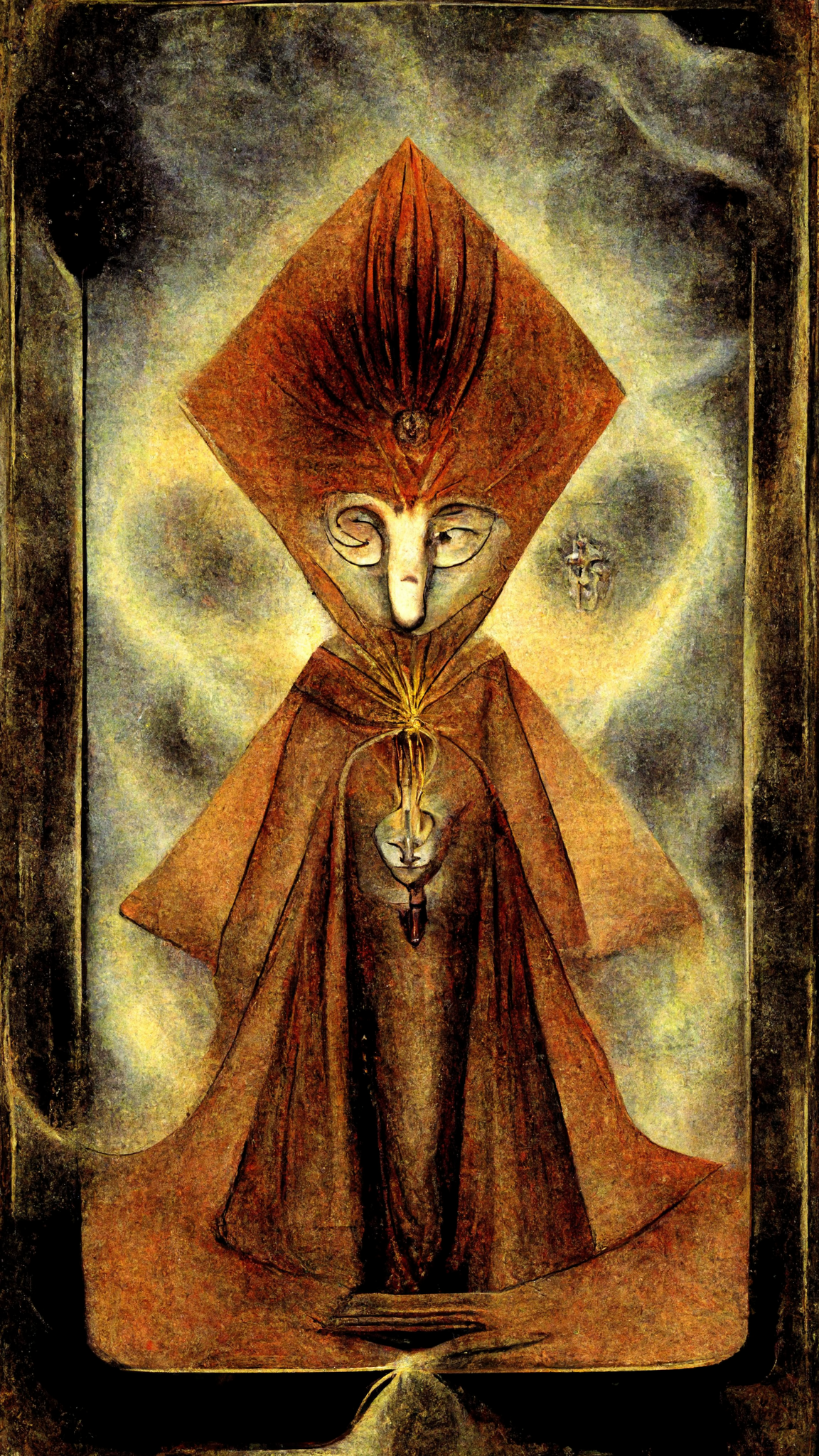 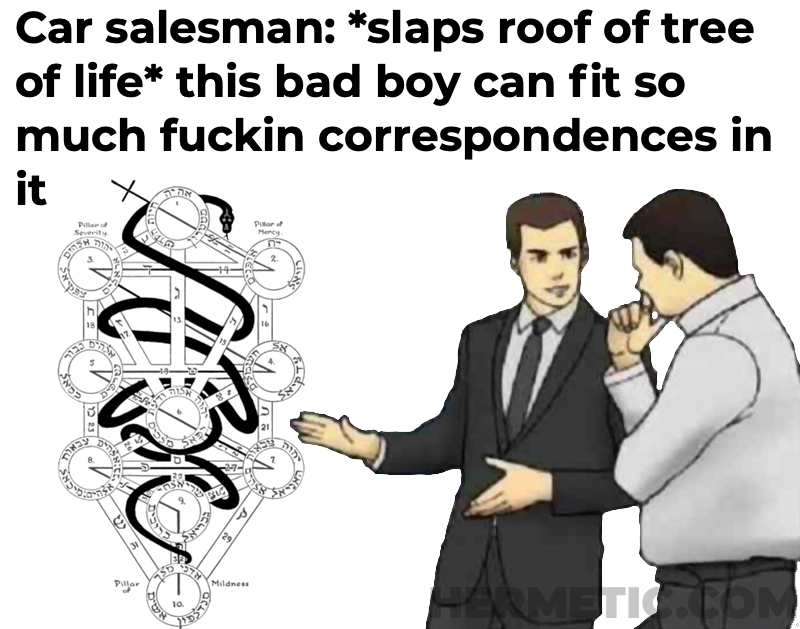 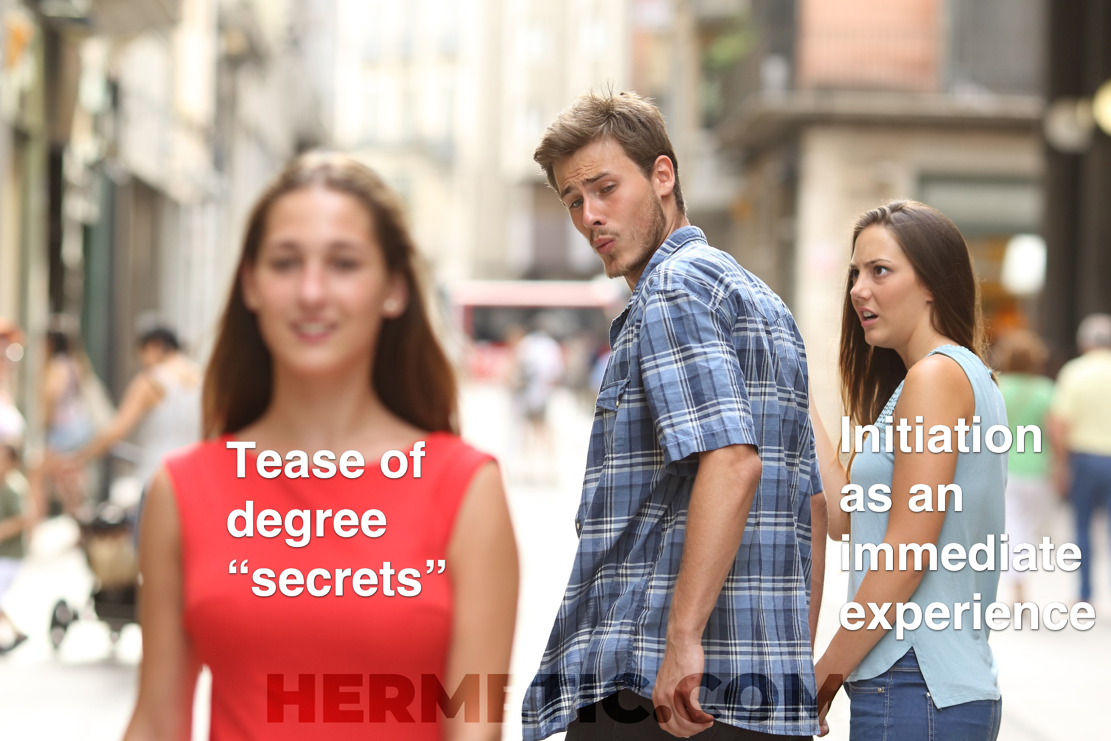 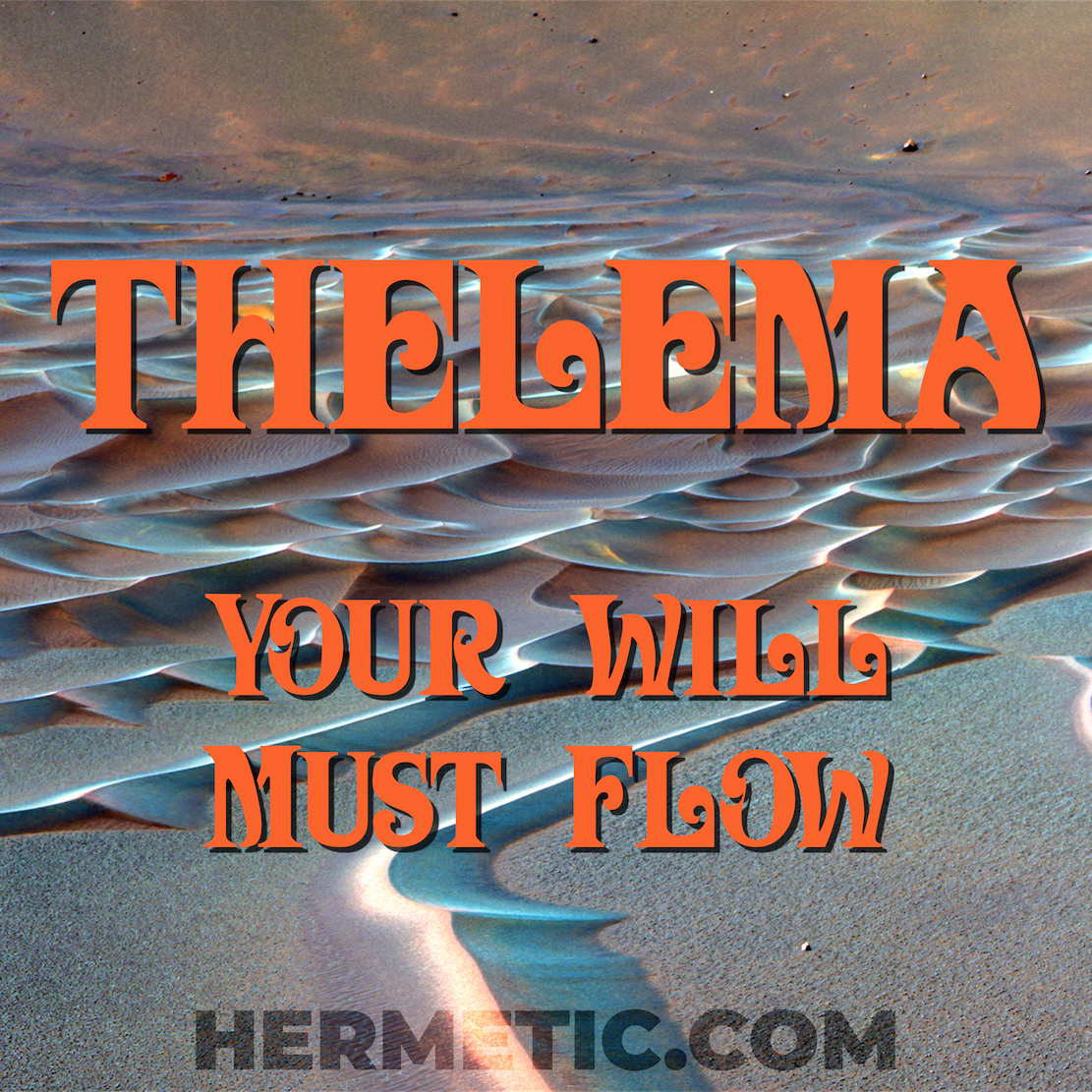