This week I’ve got some thoughts about how OTO is not a teaching order.

Also there’s AI generative art using MidJourney from the prompts “Hierophant tarot card drawn by Erol Otus” and the description of Agares from the Goetia. I’ve also learned I can control aspect ratio, so I’ve included two redone pieces with the prompt “The Fool by William Blake” from last week, but in a tarot card aspect ratio.

Not a teaching order

If you’ve listened to episodes of Thelema Coast to Coast, you may have heard a repeated claim that complains people in Ordo Templi Orientis, or in leadership, don’t have a knowledge of the work of magick. It is stated in a few episodes, so you’ll find it said eventually if you listen to a few.

At one NOTOCON (National OTO Conference) (and, as an aside, seriously, the work I did on that site got wiped out some time in late 2018, replaced with an empty install of WordPress, then they killed that shortly after, and it’s been “stay tuned” for years now! I mean, my design was over 10 years ago, sure, and admittedly dated by today’s standards, but if they didn’t have anything better, why destroy it, including the work I did to archive, for historical references, all the old NOTOCON sites that were available? /sigh) there was a Minerval Symposium, a series of presentations that Minervals could attend whilst the upper degrees were all off in their meetings. (As a reminder, a Minerval is a introductory degree that isn’t even really in the order, per se, but an introductory degree for “honored guests” instead of being considered full members.) One of the presenters did a demonstration of Liber XLIV, The Mass of the Phœnix. Later, I saw that presenter brag about shocking people with their presentation and cast aspersions on the character of the section of people present who come up after and to say they’d not known about or hadn’t seen a celebration of that before.

One fellow member of a local body I was at complained that all the Thelemic material being published was primers, and not new or advanced stuff. Fair enough, and slightly tangential to a critical complaint about OTO, per se; but let’s be fair and realize that Crowley treated OTO as separate from, but also functionally like a funnel into, the teaching order A∴A∴ created later. Well, that particular person was then becoming more involved in A∴A∴, but, at one point, they were also known to have thought it was a good idea to never brush their teeth, so, on balance, idek.

Of course, this may be ironic because of Aleister Crowley’s own complaints about Golden Dawn knowledge lectures not offering anything he didn’t already know, but keep in mind that on reflection even Crowley understood the purpose of the primer is to prime:

“At my initiation, I could have believed that these adepts deliberately masked their majesty; but there was no mistaking the character of the ‘knowledge lecture’ in which I had to be examined to entitle me to pass to the next grade. I had been most solemnly sworn to inviolable secrecy. The slightest breach of my oath meant that I should incur ‘a deadly and hostile current of will, set in motion by the Greatly Honoured Chiefs of the Second order, by the which I should fall slain or paralysed, as if blasted by the lightning flash’. And now I was entrusted with some of these devastating though priceless secrets. They consisted of the Hebrew alphabet, the names of the planets with their attribution to the days of the week, and the ten Sephiroth of the Cabbala. I had known it all for months; and, obviously, any schoolboy in the lower fourth could memorize the whole lecture in twenty-four hours. I see today that my intellectual snobbery was shallow and stupid. It is vitally necessary to drill the aspirant in the groundwork.”—Confessions, Chapter 20

Well, I submit that anyone who complains about OTO not being rigorous enough about teaching magick is a gatekeeping, self-important jerk, or, to use Crowley’s words, an intellectual snob who is shallow and stupid.

To be fair, most local bodies do offer classes, and there’s lots of books and other educational material put out by members. There are knowledge lectures about the degree symbolism after going through them available, and study guides for each degree, which are primarily about exploring the visceral experience of initiation after the fact. So, there’s some instruction available, but it’s not essential, even if it can broaden the immediate after the fact, if not already known before. But the instruction on offer is, by and large, in service to the deeper appreciation of the primary experience of initiation. And, as I see it, in OTO initiation, particularly in the early Man of Earth degrees, is not a seal on or acknowledgement of attainment, as it might be in a teaching order, but an invitation to view the world through a particular lens for a period of time.

So, maybe pick the right tool for the right job. Also, possibly maybe, don’t assume other people’s interests and priorities are the same as yours, and that if they make different choices than you they are somehow failing to do the right thing, like a freakin’ myopic narcissist. And, whether it’s about OTO or something else, don’t be a shallow, stupid, gatekeeping, self-important intellectual snob, especially about other people making their own way in the world.

This week, I tried generating some additional images for Buer, but based this time on the full text description from the Goetia. 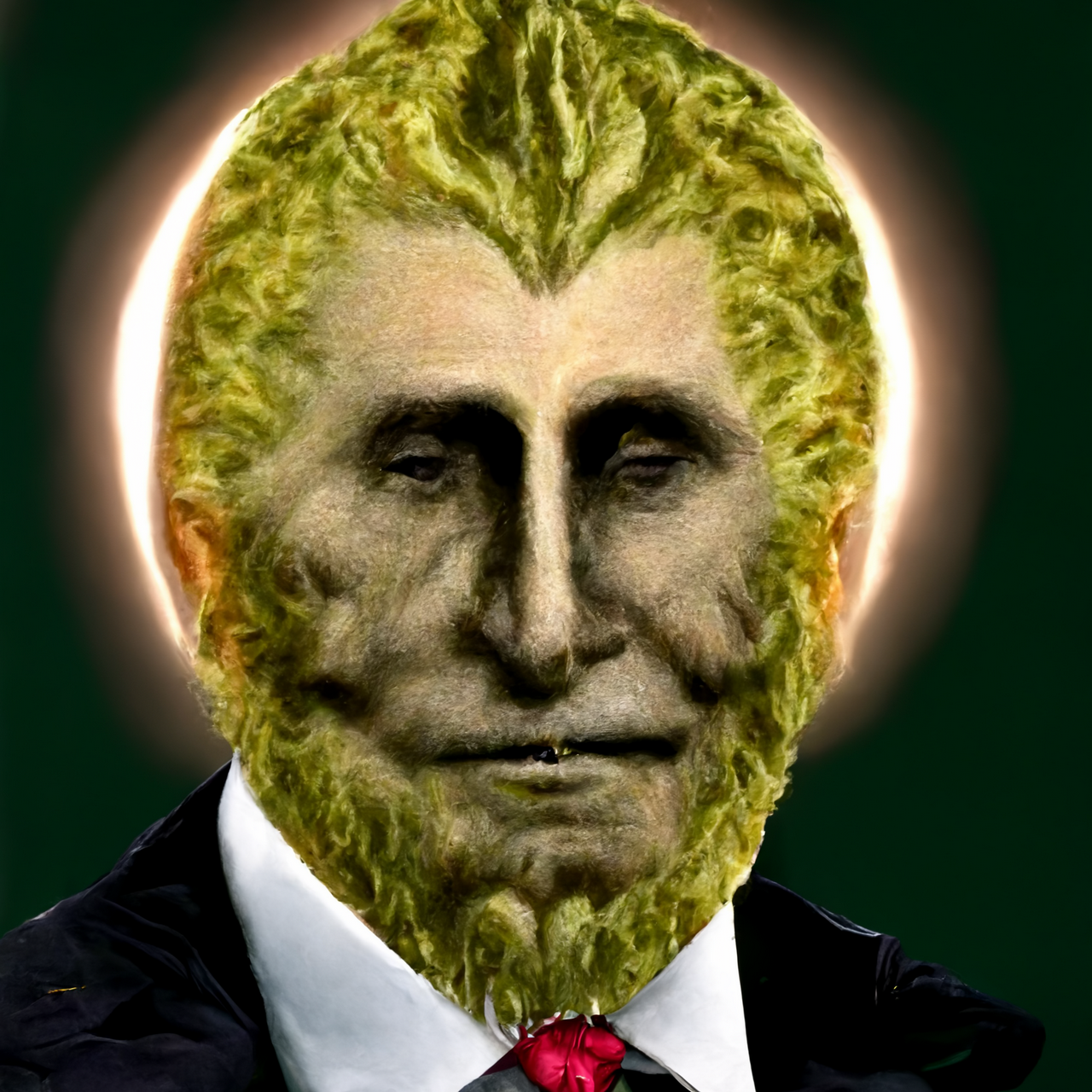 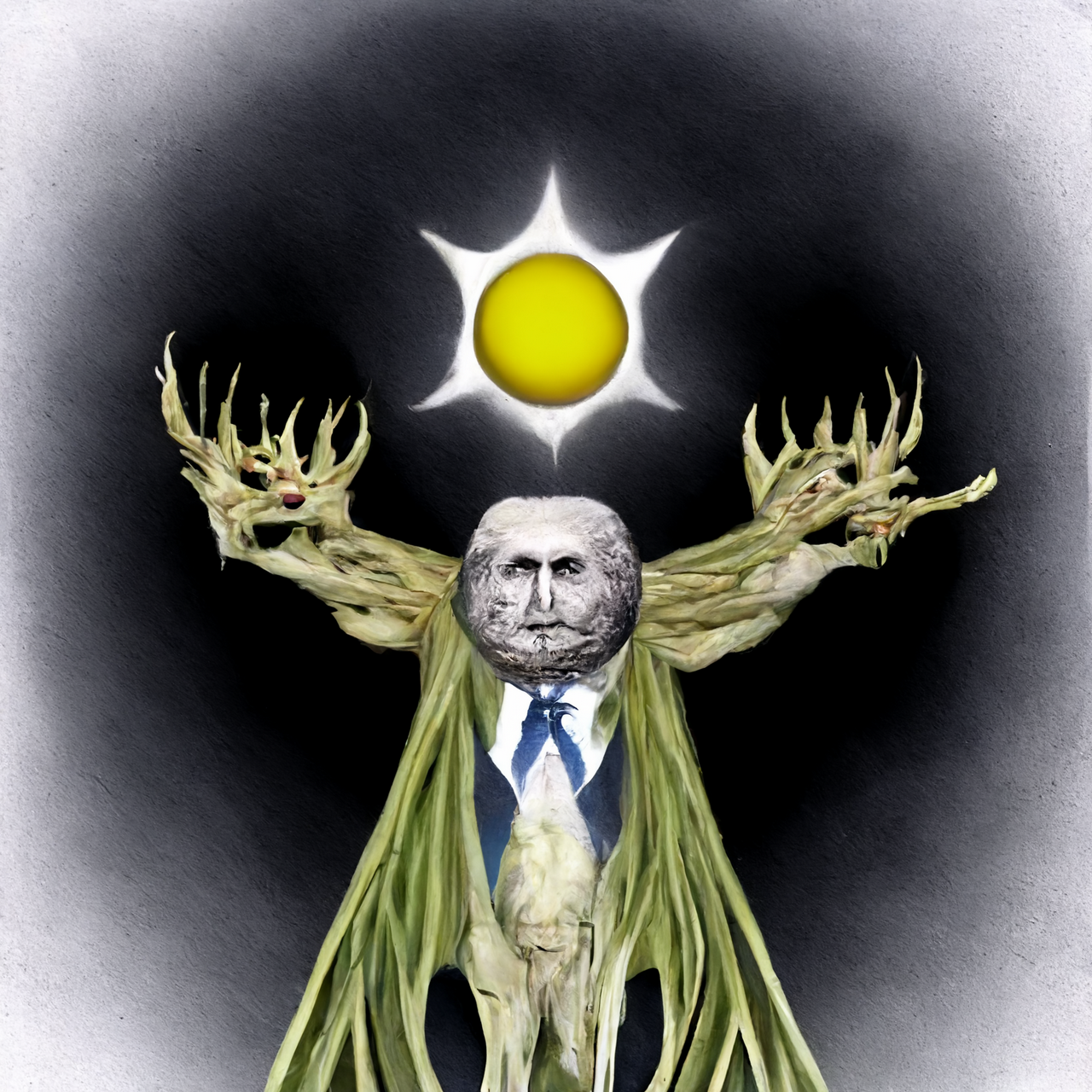 I also tried the full text description of Agares from the Goetia. 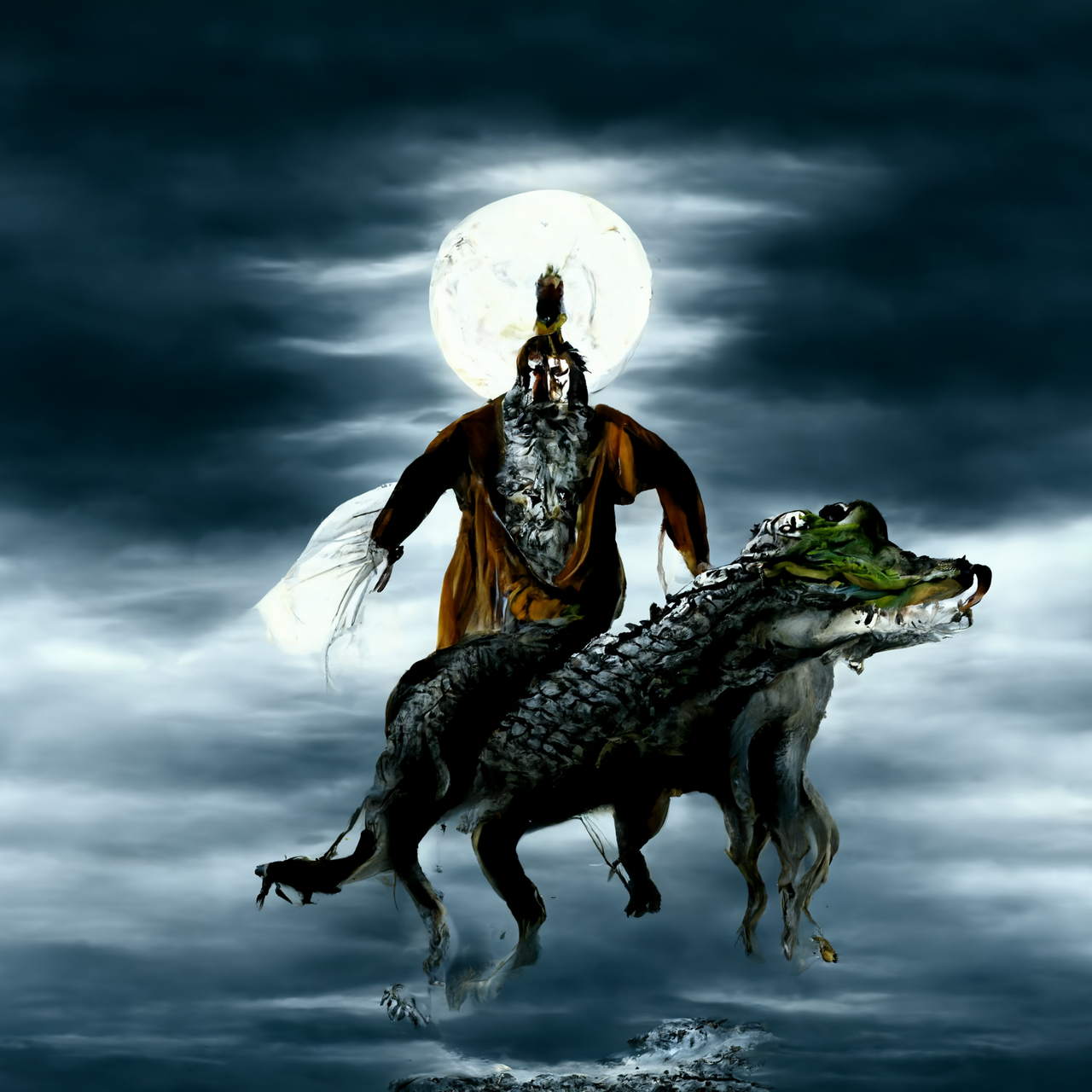 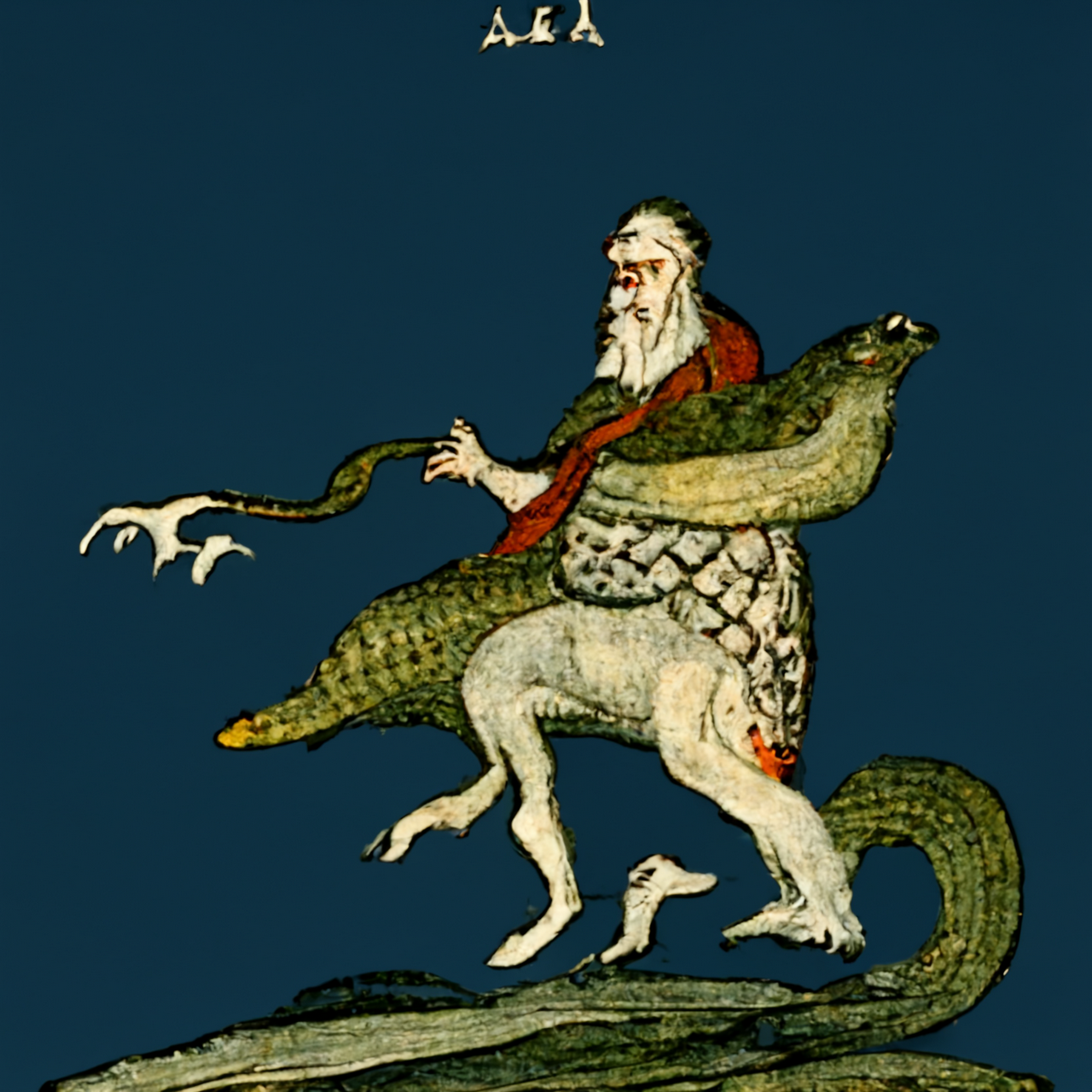 Finally, I wondered what the prompt “The Hierophant tarot card by Erol Otus” would create. Not super Erol Otus-y, tbh; but, still interesting! 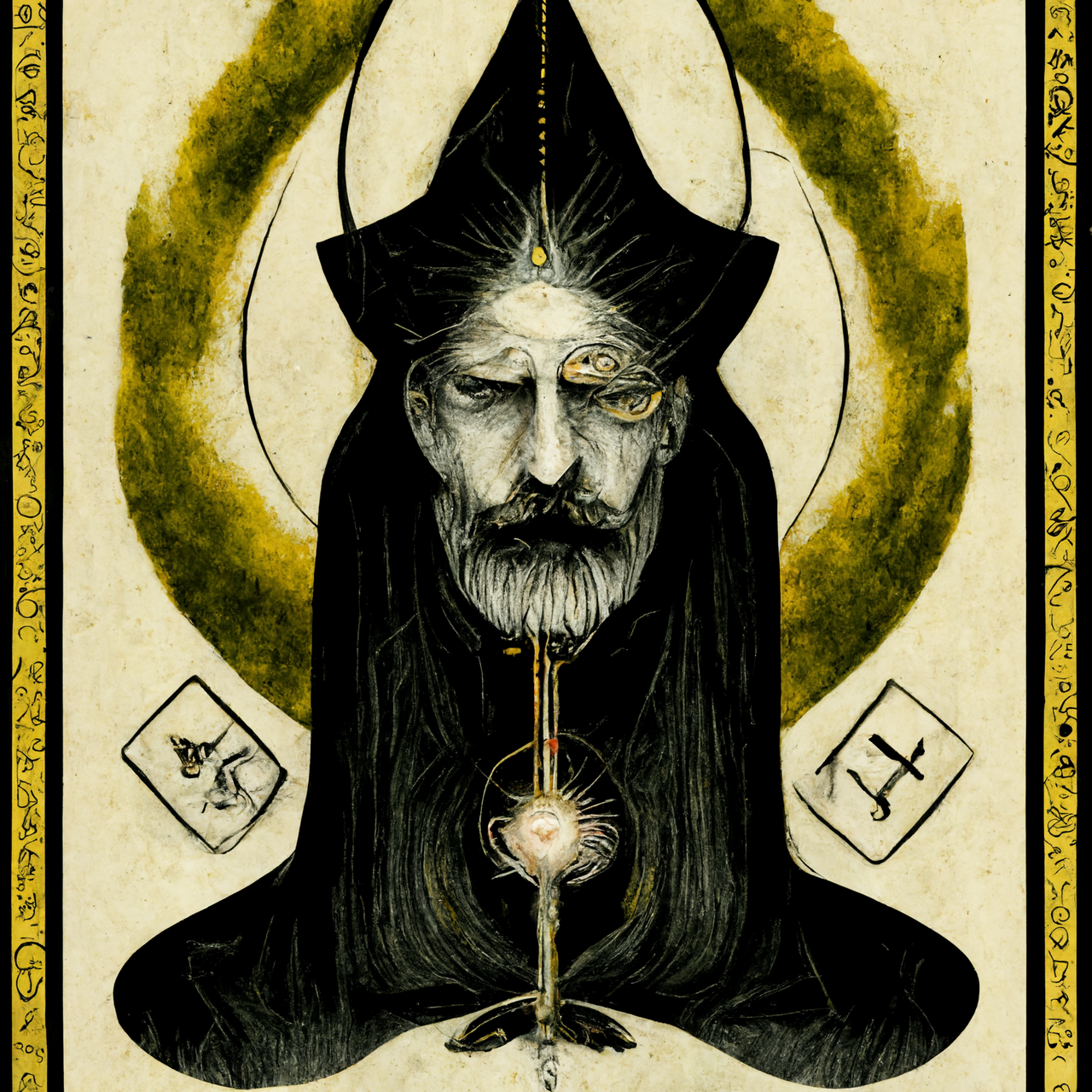 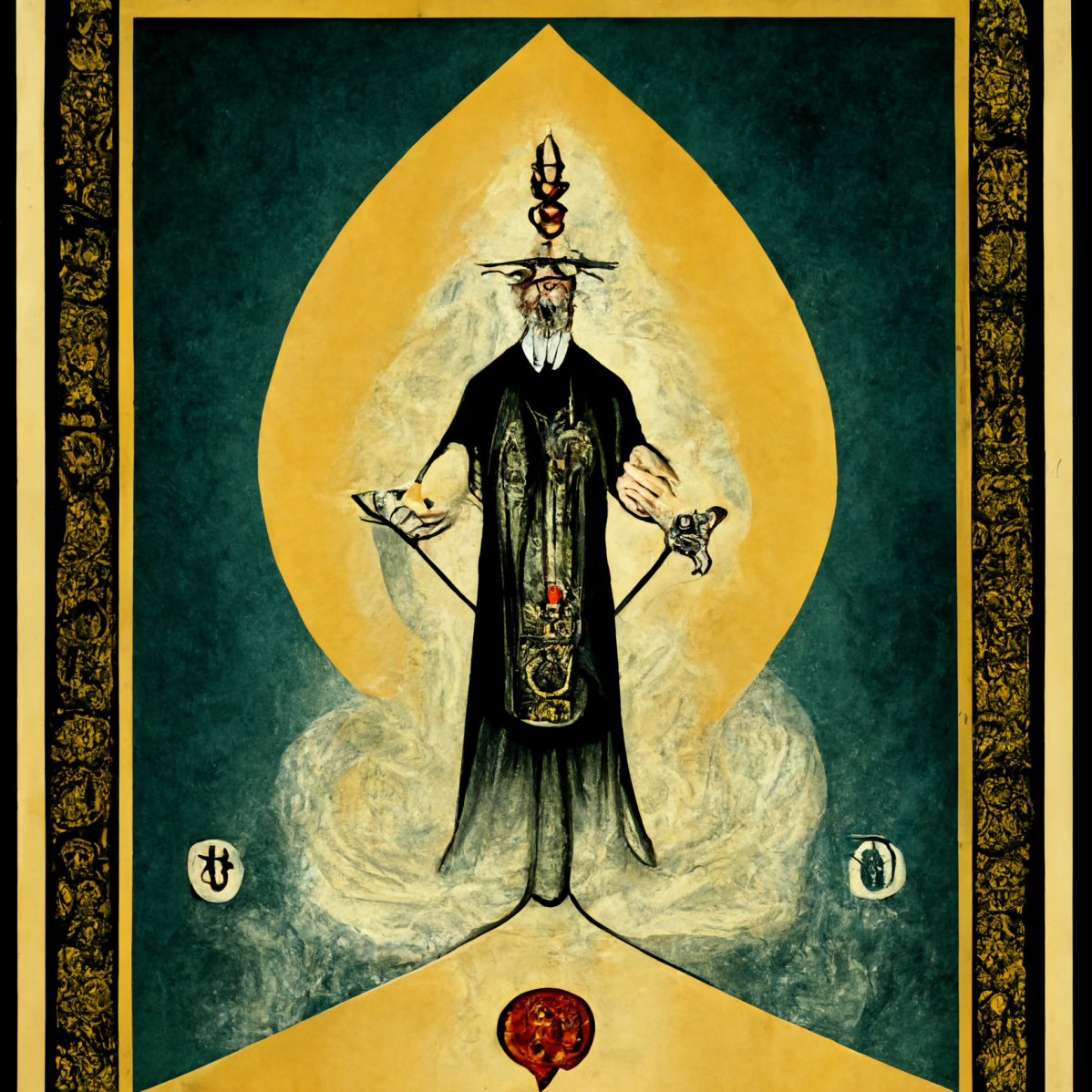 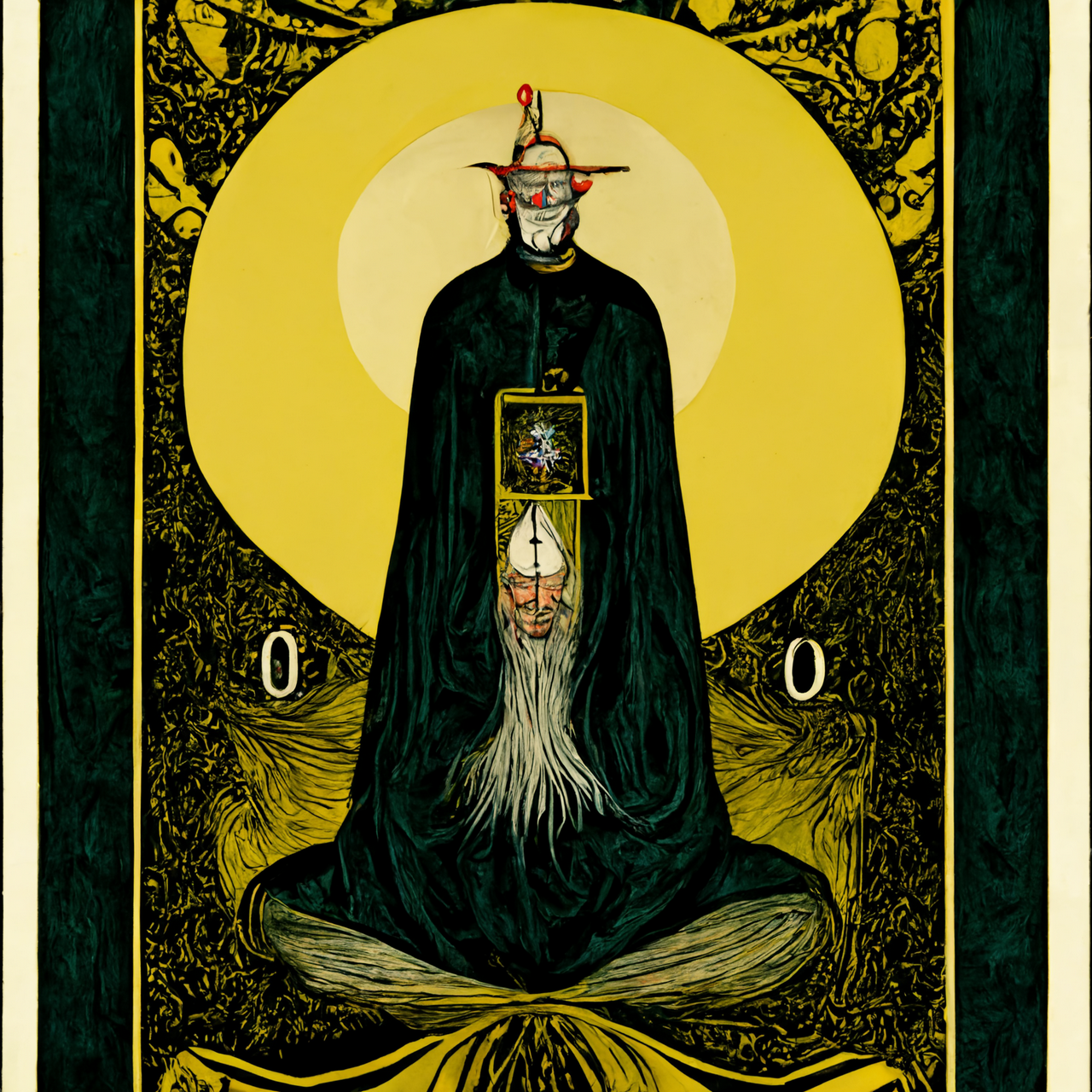 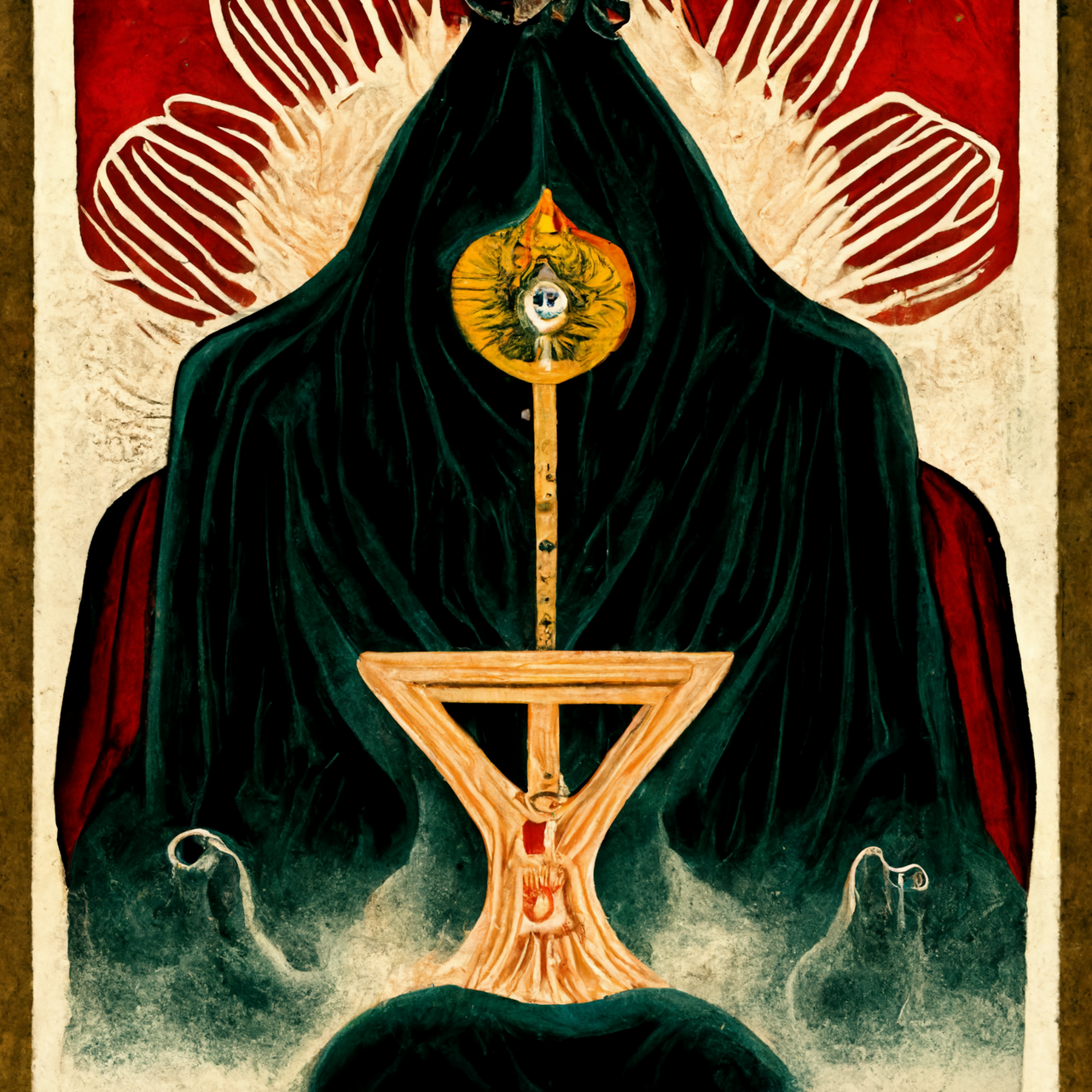 And, perhaps bury the lede, these images I’m creating can be great for adding visual verve to zhuzh up otherwise plain old text heavy Hermeneuticon articles! (I’ve always hoped for a way to get new images for those old and new entries that could use them, where I don’t have any or much visual material I can use, and there it is.)

As a bonus, I’ve realized that there’s things I can do to control aspect ratio and other advanced options. As a treat, here’s a redux of “The Fool by William Blake” but in a Tarot card-like 9:15 aspect ratio. One is very similar to last week, but the second is a new one. 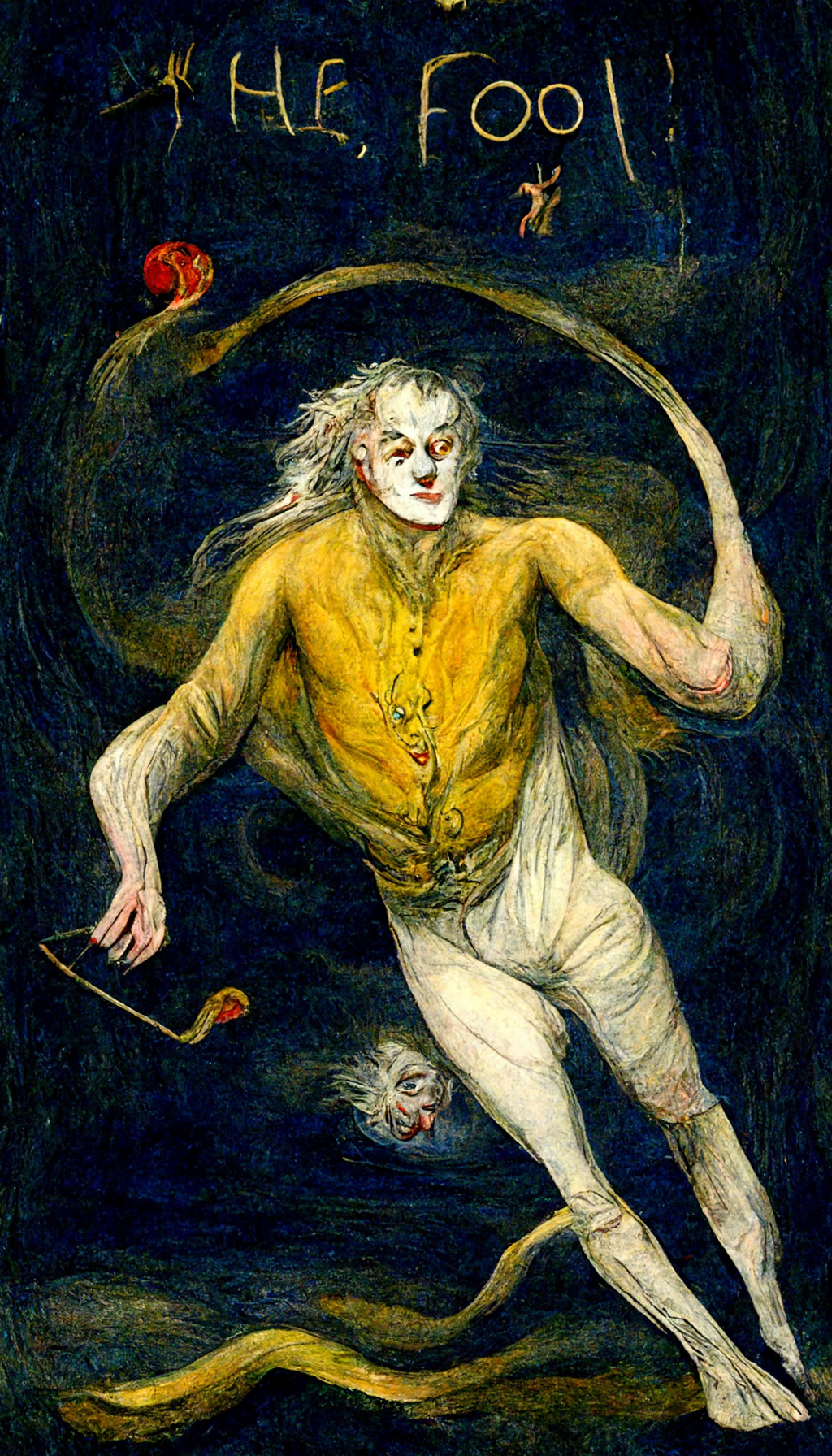 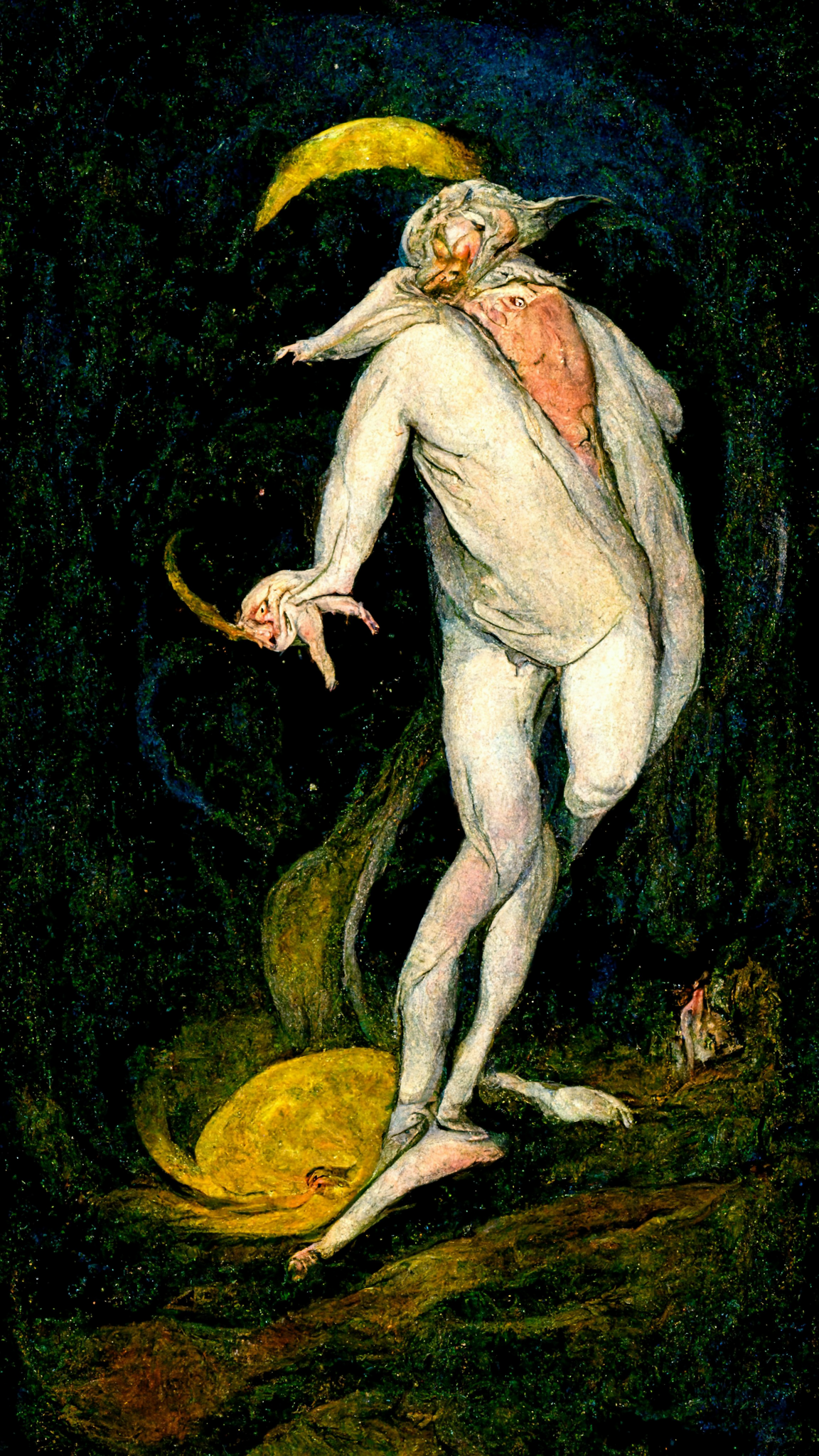 Anyhow, I’ve been learning the ins and outs of this as I go.

I may have to cool it a bit, or I’m going to run out of credits to do these each week through the month! We’ll see how well I manage that … But, if you’ve got some prompt ideas you’re itching to have me try out, reply with your suggestions!