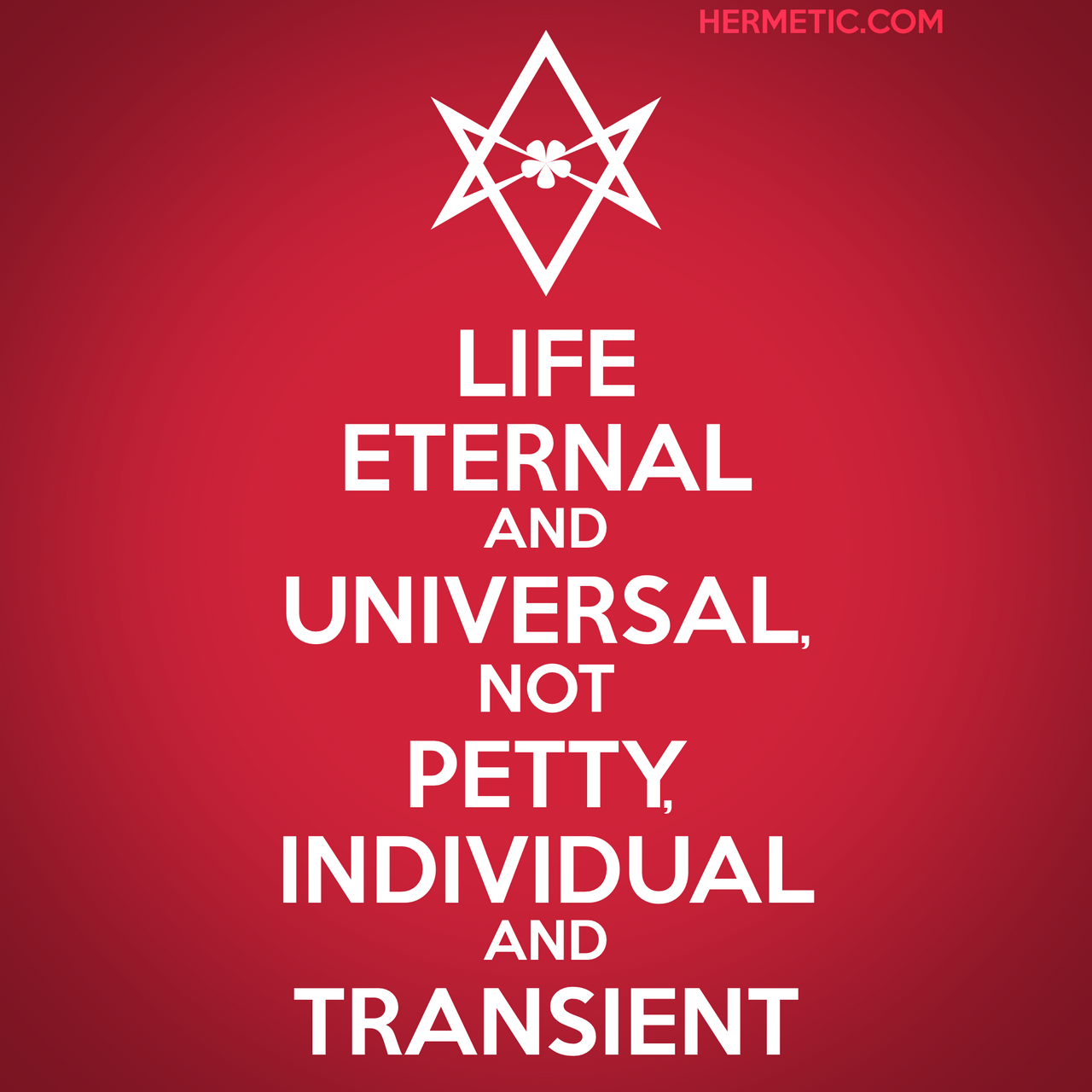 Way back in the day, I was participating in a workshop on dreamwork with Anne Hill. This workshop was related to her work, in part, presented subsequently in What To Do When Dreams Go Bad: A Practical Guide to Nightmares. When the topic of dealing with nightmares came up, a process of handling them was suggested, mainly focused on, iirc, mitigating and diminishing them.

It occurred to me that there might be another way to think about them, or a puzzle piece missing at the end that could add to the process. One might instead treat them as occult entities.

Another way one might hear suggested to deal with nightmares, is to use the panacea of a banishing ritual. Sure, I mean, that’s a floor wax and a dessert topping, so, of course. You could do that.

But, here’s what I thought of doing then, and maybe this is something you might find interesting to try as an experiment with your own troubling thoughts or dreams, or nightmares. Or, as something to suggest to others.

Go through whatever other process of dealing with such things you might do, but instead of banishing, consider issuing a license to depart:

“And now I say unto thee, depart in peace unto thine habitations and abodes — and may the blessing of the Highest be upon thee in the name of (here mention the divine name suitable to the operation, or a Name appropriate to redeem that spirit); and let there be peace between thee and me; and be thou very ready to come, whensoever thou are invoked and called!”—Chapter XVII of the License to Depart

Very likely, troubling thoughts and dreams are part of what’s going on in the world, one’s life or beyond. These are also likely to contain some kind of messages, and if one takes the time to recognize that they are serving a purpose, why not enlist them in further service?

Then, somewhat like psychologically processing trauma, one can call up this as a servitor entity and deal with it over time, bit by bit, as one does.

At least, perhaps that’s an experiment to try out for some period of time or as an operation.

One of the things that most attempts, by Crowley and others, to outline the antecedents of Thelema do is examine the question from the angle of the greek word, and then end up showing that Crowley was largely original, with a few antecedents, such as the Greek bible, Rabelais, & so on.

However, what most of those do not do is try to look at who else was talking about “will”. If you do that, you start to find that almost all of those involved with the Golden Dawn were talking about it. That means there was very potentially a lot of influence on Crowley from that circle, and also that it was a hot topic in esoteric circles in general at that time.

I think an honest, and self-honest, discussion of the antecedents of Thelema would need to do better at looking at all those who were talking about “will” as a principle and a force, and widen the scope to recognize how many were talking about that topic, both as potential influence on Crowley’s thinking but also as an interest pursued within the general zeitgeist of the time.

To artificially limit antecedents to those talking about the Greek word seems so pervasive it’s hard not to see that as willfully disingenuous.

Here’s just some of the things that Aleister Crowley pretended to be at various times:

I mean, seriously. The guy can’t be relied upon to tell the truth. So, be careful if you do rely on what he said.

Look! One of the bazillion various wildflowers I’ve tried to spread at Hermetic Library World Headquarters actually showed up! 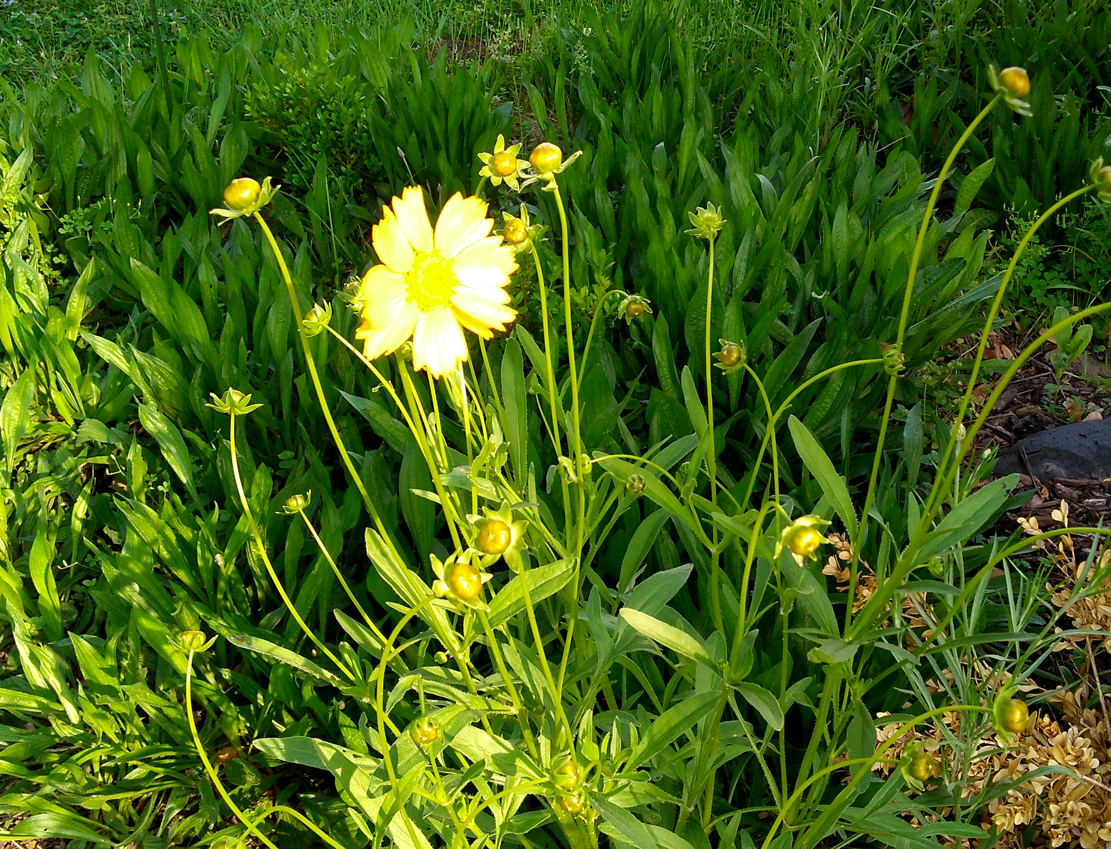 At least, I presume it’s one of mine. I suppose that might not be the case. But it’s there!

Also, a sickly sad rosebush that was in the wrong place to thrive appears to have mostly survived being moved. I was a bit worried about it, since I’d heard that roses don’t like to be moved. Also, there’s some strangeness going on under the ground: this bush appears to have been a lifeboat that sprouted from a GIANT root that goes across the yard?! IDEK. There must, at some point, been a bunch of rose bushes here. This is all that survived, and now, I hope, will continue to do so, in some fashion. 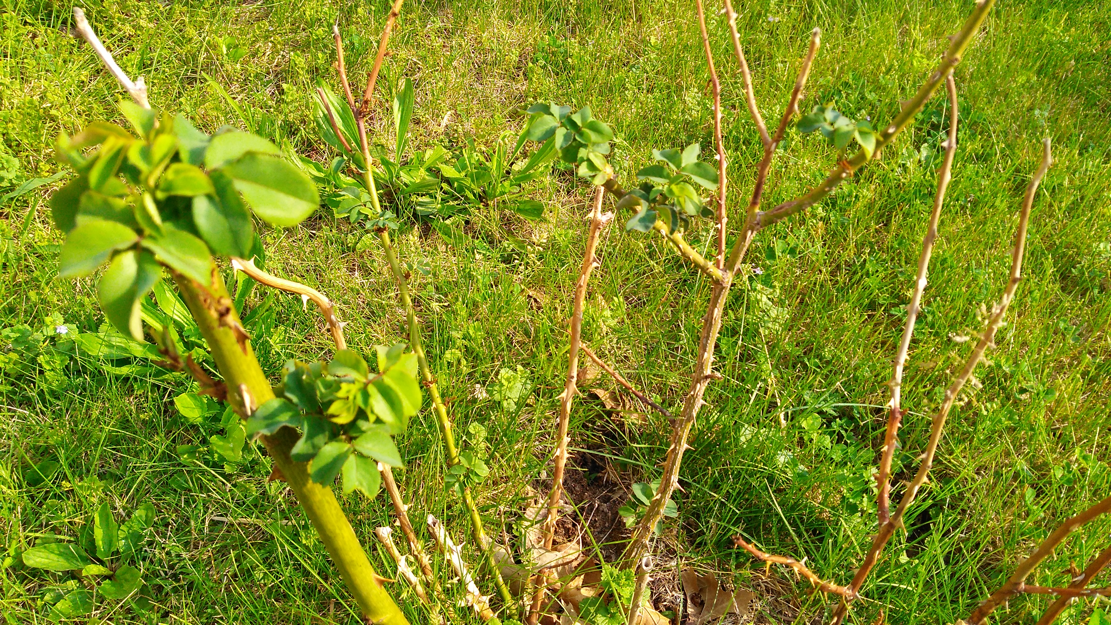 I think I’d previously mentioned that I was doing an experiment this year with planting some milpa mix of companion seeds, that I intend to be very low maintenance, and happy with harvesting a portion of whatever show’s up. Here’s one of three rows, and there’s a whole lot going on here already. It will be interesting to see what more happens! 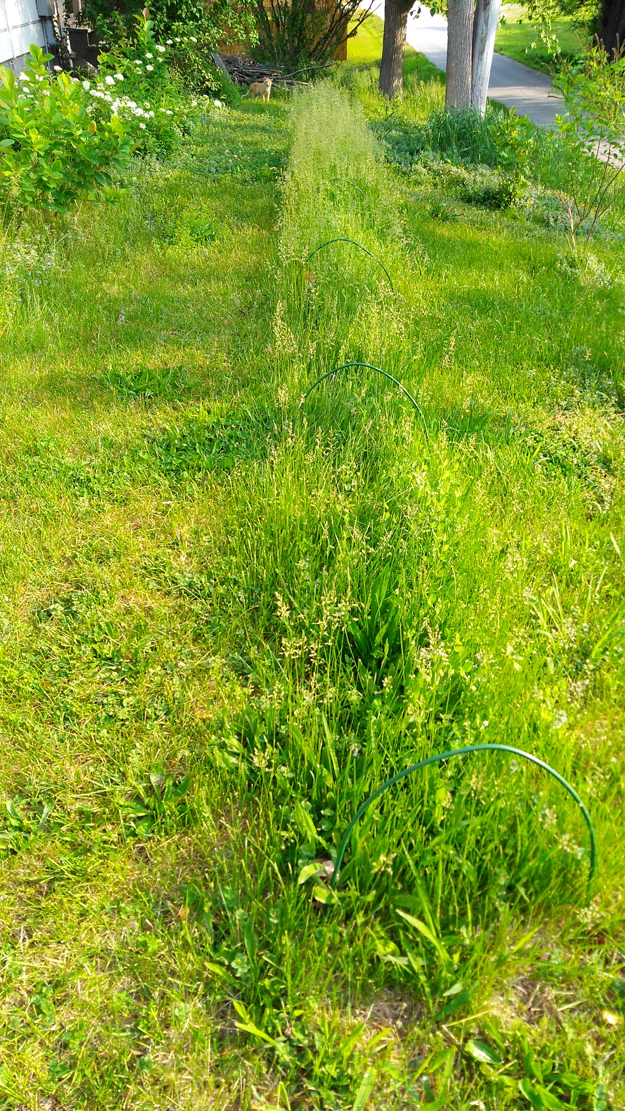 (Notice there’s one of the many, many neighborhood feral cats checking me out too from the other end of this row. As much as I wanted to also grow some juicy fresh catnip for the library cats, no, no … that would be inviting a nightmare-level plague of feral cats, and their worms and fleas and whatnot, to infest the yard. Bummer.)

But, it’s pretty dense in there with stuff, so I’m excited to see what muscles itself out. My hope is that these will sort of be self-sustaining, and I’ll grab some things from them, but also let some cycle into next year? That’s a couple phases of the experiment anyway.

I had hoped to plant a bunch of plots of heirloom sunflowers, but didn’t get to it. Also, I’m thinking about either container planting or hügelkulturing potatoes and onions at some point … at this point, those will have to wait until next time, I think.

This week I finished up the automations for a bunch of the social accounts, and I added all the covers for the albums to @MusicRadio. It’s all pretty now!

What else should I set up? I’ve got some ideas I’m thinking about, but not yet cooking. What kind of social accounts would you like to see set up, if any, I wonder?

What’s next is that MMR17 is incoming! 🎉

I’ll be posting the call for submissions at the beginning of June, with a deadline for submissions in Sept. Then, if I’ve got at least something, I’ll release TINAHLAA-4 for Thanksgiving, and, if there’s more than just something and enough for a full release, MMR17 will come out at the beginning of December, for the anniversary of the library’s birth!

I’ll plan, if things get sorted and there are releases, to also do scheduled listening parties on MUSIC RADIO @ HRMTC, and I’ll share more about that, if and when, down the road. 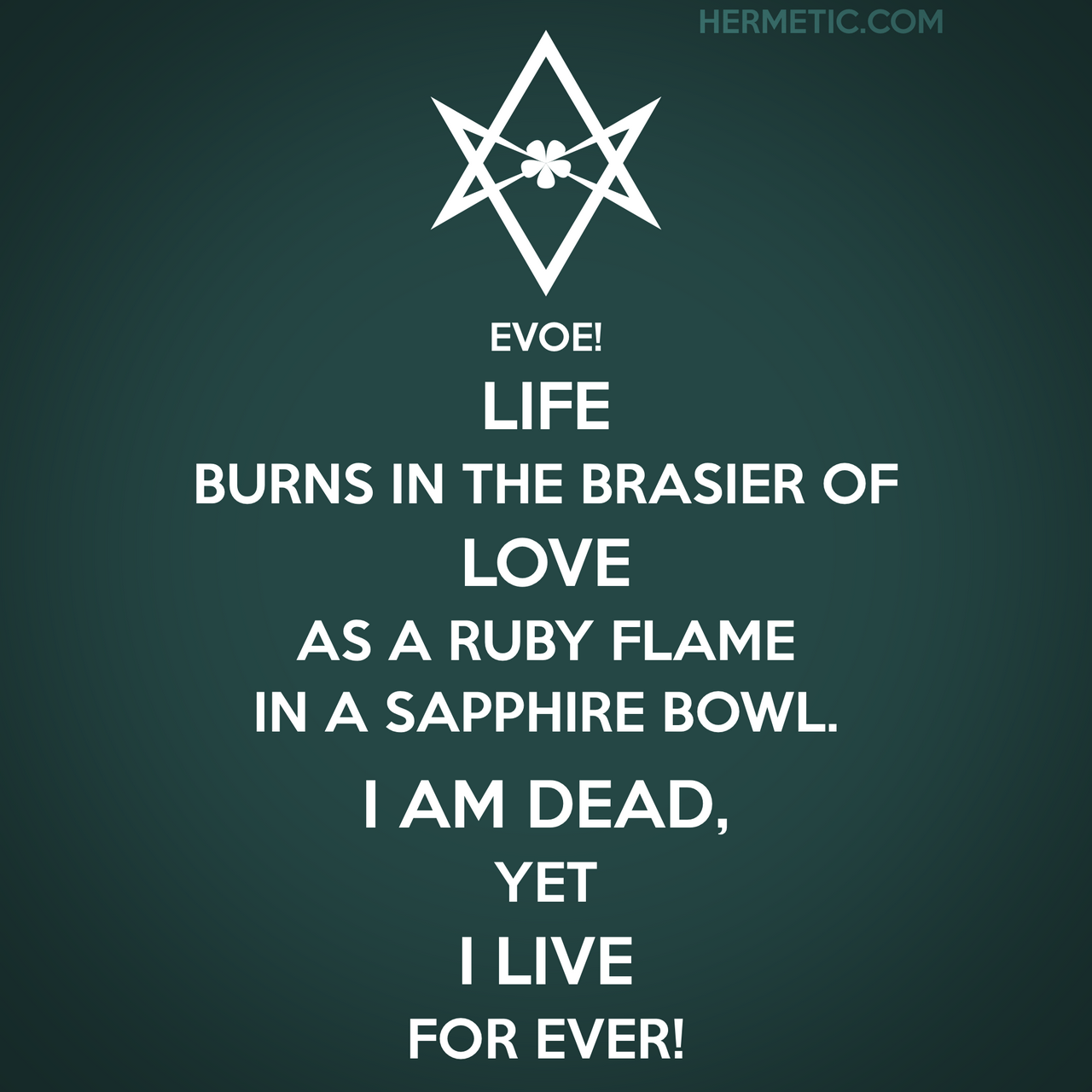 Here’s upcoming calendar and astronomical events, plus the daily Thelemic Tephilah practice for the coming week, May 20–27. By the by, this coming week will also be the anniversary of my own birth, on May 24th! Another year successfully travelled around the sun! Huzzah!